We all remember the big boys on that team, like Schilling and Varitek and Derek Lowe and Ortiz and the raw sex appeal of guys like Dave Roberts and Doug Mientkiewicz.

But a lot of guys got a ring that year that maybe aren't household names. Not even in their own households, where they sip endless cups of tea and blend in with the drapes. Who are these forgotten warriors and where are they now?

1. Sandy Martinez, A Catcher - Sounds like a delicious beach cocktail, but Martinez was originally a Blue Jays guy who winnowed his way through backup-catcherdom and was snapped up from the Indians in August of 2004. He played in three games with Boston and did not reach base once. The Red Sox were the last big league team Martinez played for, and he retired in 2007.

2. Brian Daubach, A Remainder - Included because Daubach evidently played in 30 games. Was probably mostly in Pawtucket but he's got a kind of muddy timeline. He's gone! He's back! He's in the minors! He's drunken!

Also, Daubach went from a player we all loved to... I don't know, but he hit a wall. Yes, I am aware that he's a minor league manager and probably doing well for himself. But he looks like hammered shit.

3. Cesar Crespo, A Ute - CESAR CRESPO PLAYED IN 52 GAMES. Did you realize that? He also never walked. Not even once. His batting average is exactly the same as his OBP. Definitely a Pawtucket kid. His last Boston appearance was July of '04 and he never played in the majors again. Retired.

Oh, by the way, Crespo was previously on the same Padres team as his brother, Felipe, and they both homered in the same game. They are probably no longer on speaking terms.

4. Ricky Gutierrez, An Encouraging Ernie - No one exemplifies the role of 'Guy Who Never Played But Was Top-Stepping the Entire Time' like Mister Gutierrez does. Seriously, go back and watch the games and he's always there in his little hat, slapping everyone on the back. You might think he was merely Ortiz's personal valet, but in fact he played in 20 games, mostly at second. In case both Bellhorn and Reese had bad sushi?

After Boston, RG never played in the majors again. He is, of course, retired.

5. Andy Dominique, A Doughboy - Porky catcher from Pawtucket who played in seven games. You may remember the fans chanting his name during a game, but you probably don't remember what for. I sure as hell don't. Domninique got a couple of hits and and an RBI, so there's his contribution.

Dominique played in a couple of games for Toronto in 2005, but that was THE END for his career. He's a softball coach in Reno now, and here's a current photo that will make you feel like Oldy Olsen.

6. Earl Snyder, A Tweener - Snyder was crushing it in Pawtucket in '04, setting home run and RBI records all over your face! Snyder played in exactly one game for Boston in August, getting a hit but also striking out and grounding into a double play. Keep that ring nice and polished, Snyder.

In a related story, Earl Snyder's Dead Ringer has a blog, which hasn't been updated since 2005. However, its value as a time capsule of emotion cannot be overstated. Kenny Rogers assaulting a cameraman?! Crazy!

7. Jimmy Anderson, A Lefty Reliever - Pitched six innings through five games. Spent most of his early career as a Pirate and has the garage full of contraband stereo speakers to prove it. Boston traded Andrew Shipman to the Cubs for Anderson's services. He never gave up a home run. He also never played in the majors after Red Sox '04. Why would he? I would think there'd be nothing left to achieve in life.

I wish I could remember him. I looked at a couple of pictures but nothing sparked. RETIRED.

8. Terry Adams, An Arm - He was a righty reliever. His frighteningly broad moon-pie face is what I have kept with me through the years. Pitched in 19 games. Came to us from the Blue Jays in exchange for John Hattig, the Guamiest guy who ever played at McCoy Stadium. Last seen on the Phillies in 2005... Or on the Indianapolis Indians in 2006, like that counts. Oh, and his rookie card is a disaster. Retired.


9. Mark Malaska, A Quitter - Malaska retired very hastily. Nothing more to add except that in this picture he looks like your Aunt Shirley. Turn off all your lights before checking out the photo for the full creepy, funhouse effect.

10. Anastacio Martinez, A Casualty - Pitched in 11 games. Possibly "best" "remembered" for being traded to Pittsburgh with Brandon Lyon for Mike Gonzalez and Scott Sauercrap in 2003. And then the Pirates were all, like, "Hey! Brandon Lyon's elbow is frayed like Chinese blue jeans! Can I speak to your manager, please?"

So Lyon came back, Martinez came back, Suppan was sandwiched between them (Awwww, yeaaaah!), and Pittsburgh got Mike Gonzalez back. Plus the Marvelous Freddy Sanchez. I could write a book. Or make a documentary. I would pay to see that. I would pay to watch my own documentary. That's how much I love painful and degrading trade stories.

Retired, but played indie ball in 2010 for Calgary. Good for him!

11. Pedro Astacio, A Has-Been - Astacio racked up a 10.38 ERA through five Boston games. Last played in the Nationals org in 2006. How many years can a player call himself a 'free agent' before admitting to himself and the world that no one wants his ass?

12. Jamie Brown, A Gaijin - Pitched a few relief innings in May of 2004. Split for japan after that, worked overseas for a few seasons. And now no one can find him, because his name is Jamie Brown.

13. Phil Seibel, A Mack - Insurance Agent to the Pro's. I think that says it all.

Pawtucket WINS! 2-1. Another game I didn't do because I was on vacation in Toledo. And it was Lucky's birthday!

Starting tart was Tony Pena Jr, who was really, really smelling good. He looked good, too: Pena pitched six shut out innings, with four strikeouts and a walk. And four hits, yeah, four hits and none for extra bases YEEEAAAAAHHHHH!!! See that? I just got worked up over Tony Pena Jr.

Oppo guy was lefty Ramon Garcia. Garcia could not get that last out in the fifth inning. Hey, what happened? Well, Tony Thomas led off with a double. Garcia struck out former Mud Hen and current question mark Brent Dlugach. Matt Sheely popped out in foul territory. Two outs and Thomas is hanging out at second, waiting for his chance. Tony Thomas is an old soul.

Ronald Bermudez was the next batter, and good old Ronny doubled, bringing Thomas around to score. Thomas was later quoted as saying, "Come on, Ronny, mellow off! You're really bringing me over, man!" 1-0 Pawsox!

And so it was that Garcia was replaced by Australian reliever Fu-Te Ni. Ni finished off the fifth inning by first hitting Che-Hsuan Lin with a pitch and then getting Iggy Iglesias to ground out. Ta-da!

The Red Sox scored again in the seventh inning, when Tony Thomas homered off reliever/sprocket jockey Matt Hoffman. No one was on base.

Dennis Neuman! Neuman took over for Pena, allowed Toledo to score a run. This was mostly thanks to the Viking at first base, Ryan Strieby. I don't know, look it up. Someone hit a ground ball, okay?

That's all for today. I have to buy a car and the research is killing me.
Posted by Jenks at 1:52 PM 2 comments:

Baby Lars Anderson agrees with you. 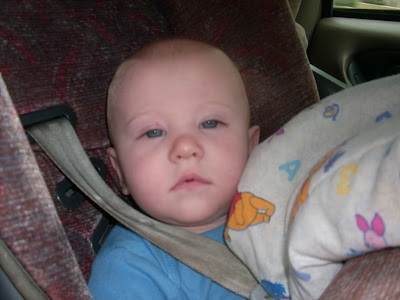 1. Matt Sheely went to Seminole State College. In 2006, while he was a freshman, Boston drafted him (48th round) and sent him to XST. "Sheely's season was highlighted by a 5-for-5, three runs scored, two RBIs, two stolen bases performance versus Monroe on Mar. 24. He was named First Team All Mid-Florida Conference by the conference coaches."

2. Also, third game of the season in Sheely's freshman year, he was hit in the FAYCE by a pitch. Sheely missed nine games thanks to the injury. The man who threw the pitch? CRAIG HANSEN.

3. The majority of Sheely's organizational games were played with Portland.

4. From "A Believer" : "24 year old outfielder. Who spent most of his season with
Double A Portland but played 7 games with Triple A Pawtucket. Batting (.238)
(.222). Below Average batter, doesn’t have a lot of hits. Once he gets on
base, threat, above average speed. Can play all outfield positions
successfully with good range. Not a strong batter. Hits better with people
on base."

5. This woman has several candid shots of Matt Sheely. They are from a couple of years ago and feature other future PawSox members like Kalish and Doubront.

6. Tough love from Marisa Ingemi: "In Portland he did nothing and he cannot be expected to do more at a higher level. I question why Alex Hassan was not recalled instead. He is the better prospect and will get more out this promotion than the non-prospect Sheely. A weak hitting outfielder with little skills, he won’t be around for long."

7. "I got see this kid Matt Sheely put on quite the show. He hit his second professional home run in the game — his first one came the night before — and he had driven in 15 RBIs in just 60 at bats." Sheely had some early success in Greenville.

11. Look at these good pictures.

12. Fragile Freddy : "One thing I saw that was interesting was when Chris Balcom-Miller hit Matt Sheely with a pitch. While an apology would not be issued during a game I figured “hey, teammates during BP, he will apologize” but nope. Balcom-Miller simply grabbed another ball and got back on the rubber."

13. Dan Hoard with some Matt Sheely slice of life.

14. Matt Sheely's voice cracks sometimes when he talks about the kids. One day he helped some youngsters master bunting. Uh huh huh huh.

I gotta stop because I keep this: http://www.blogger.com/img/blank.gif. Thanks, I certainly love removing that junk after all my links.

I don't feel like I've learned anything about Matt Sheely.
Posted by Jenks at 10:34 AM No comments: