I hear this song at work sometimes, and I always have to pause and listen to the killer xylophone solo. And I wonder, does the guy have xylophone face? In concert, would he toss the mallets in the air like a real rock star?

Except just now I found out that it is not a xylophone, it is a marimba. Whatever, a marimba is pretty much a xylophone, but I now have to reorganize my thoughts about "Moonlight Feels Right".
Posted by Jenks at 2:23 PM 3 comments:

in through the out door

Adam Bernero is GONE! The Pirates have collected him and now their bullpen is complete. Excelsior!

Boston's signed 2B Joe Thurston, SS Tony Granadillo, and SS Gil Velazquez. I know that I know at least two of these guys.

I also noticed that D'Angelo Jiminez had some action. A signing or something. I was at a spring training game once and on the lineup sheet he was listed as Jiminez D'Angelo. Sort of like Geronimo Gil being listed as Gil Geronimo, except not as cool.

I know you don't run into too many D'Angelos, but come on. That's just sloppy assholism.

More on the three infielders when I finish my shopping/slacking/eating.
Posted by Jenks at 11:41 AM No comments:

Bobby Scales must find an apartment.

Bobby Scales has been signed by the Cubs. Bobby Scales played every position except pitcher/catcher last year. He was great and could have won team MVP if not for Brandon Moss. He will be missed. By me. And maybe Mike Tamburro.

Scales led the team in triples with nine.

Kevin Cash faked me out and is returning to Bostucket. I was all for getting rid of Mirabelli but Dougie did not exactly get paid last year. So... looks like I may end up getting a double shot of Led Zeppelin at McCoy, since both Cash and Bailey used them for at-bat songs.

Nobody beats a Bailey deal!

I don't know how to say this, so I'll just say it. JEFF BAILEY IS BACK!

The Red Sox went and resigned him. I can't believe it. It has been a long time since I've seen a guy last this long in Pawtucket. I don't get it and I don't understand, but that's fine. I love Jeff Bailey.

One of the greatest baseball moments for me in 2007 is Jeff Bailey getting called up to play a weekend in... Chicago, was it? I don't know but he did end up hitting a home run and it was his sole production.

Welcome back, neighbor!
Posted by Jenks at 11:54 AM No comments:

He used to give his mother flowers and that. 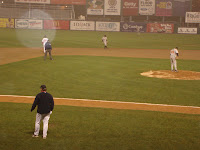 Former Pawtucket/Portland pitcher Lincoln "Sheldon" Holdzkom has been ruled fived by the Phillies. So that was good.

He wasn't in Pawtucket long enough for me to really have an opinion or attachment. But good luck and all with those guys.

Also, bitchin' reliever Travis Hughes has been signed by the Yokohama BayStars to a one-year deal.
Posted by Jenks at 10:31 PM No comments:

backstage at the Grammys

Oh my god, where'd all these guys go?

Do these guys know how to party or what?

You know there's that one guy who can never remember the bus schedule.

Don't mess with Barajas. Or the little blonde guy.

The veterans get the big lockers.

Merry Christmas, RJ.
Posted by Jenks at 10:18 PM No comments: 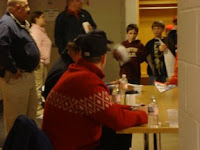 In short, no players, new coaches. Hitting coach Russ Morman wore a terrific holiday sweater. I took note of the bulletin board menus in the clubhouse and noticed that they order their Dominican food from MY FUCKING CITY!! Central Falls! I used to go to that place sometimes and the guy there's really cool and maybe a little handsome. Rakishly. Shh, don't tell him I said.

No Kapstein, but I did see Bob from Bob's Big Adventures and most of the staff.

I got a few free GA tickets. And have I told you this? In the 'players and personnel only' area, the halls are lined with meorabilia. Really great stuff, newspapers and plaques and trophies and posters. Like a little museum. If you haven't been to one of the off-season fan things, you really need to get on it.

Hot Stove Party should be in late January. It generally coincides with Boston's tickets going on sale (the remainder).

I'm going to Hartford... okay, WEST Hartford for a couple of days (work). If everyone could hold off on major moves until Wednesday, that'd be great. I love you.
Posted by Jenks at 10:04 PM No comments:

Super Joe and his unceasing hustle.

Trainer Greg Barajas and Buda must get mad ladies.

Bobby Scales is kissed by warm September sunshine.
Posted by Jenks at 9:48 PM No comments:

And they finished off the day by chucking mushballs to the last few fans.

The players await the soft toss after their final introductions.

Alvarez can't handle everyone looking at him right now.

Craig Hansen started throwing his equipment up to fans.

Abe Alvarez struggles to hit his spots with his squishy balls.

PawSox players throw squishy balls into the stands from the third base line.

Dave Pauley shows off his cannon.

Charlie Zink prepares to soft toss.
Posted by Jenks at 11:39 PM No comments:

My favorite ballpark souvenir is a program. Whenever someone I know goes to a non-local ballgame, I ask very nicely if they can get me a program.

So when a co-worker was headed for Atlanta, guess what I asked for? YES. And the Atlanta Braves program might be the best one I've ever gotten. Thick and glossy and well put together. And of course, they pose a set group of questions to guys on the team to maybe reveal a little bit about their personalities. These questions are kind of pointless and generic but really reveal the inner dullness of professional jocks.

Willie Harris. Remember him? 2006? Big bowl of Pawtucket with a dash of Boston? Good guy, nice to the kids? Small and fast? The anti-Dustan Mohr? Harris wound up on the Braves last year and really had a great time for himself, especially the night he went six for six with four singles, two triples, six RBI, four runs scored and a stolen base. And when he was asked what TV show he watched regularly, he replied:

"Sanford and Son. It's hilarious."

WOW. A man who appreciates the classics. Amid all the 'Seinfeld' and 'Friends' and 'American Idol' and 'Survivor' that his teammates chose, he picks the classic sitcom 'Sanford and Son'. And he's right... it IS hilarious. It also has probably one of the greatest TV themes of all time. I bust it out at work every now and then. My boss loves it.
Posted by Jenks at 1:15 PM 1 comment:

The increasingly popular Brockton Rox have tacked their schedule up on the bulletin board. By all means, race over and check it out. I'm excited and so are you. Home opener is May 24th, and they'll be welcoming their one millionth fan. And this year, a concert on every Saturday night after the game.

The Can-Am has had a travelling team the past few years. A team without a home ballpark. So where do they... I mean, how can you... I don't know. They managed. But this year there will not be a travelling team. Remember the Ottawa Lynx (Internatonal League)? Their vacated ballpark will now be home to the Can-Am's second Canadian ballclub. I think they're unnamed so far. Good luck to the new people!

No North Shore Spirit? What the hay? I swear I remember driving up to Lynn a couple of years ago...

In other news, I think it would be wicked fun to go to a Can-Am game in Atlantic City.

Last things last, the 2008 Granite State Baseball Dinner that I can't stop babbling about has added yet another superstar guest. I wish I could make you guess. I'll give you a hint: not a pitcher. Never played for the Devil Rays. Southern man.

Have you ever heard of the Berkshire Black Bears? No? I haven't either, but when former Quakertown Blazer Tim Bausher was released by the Mariners back in '03, he wound up playing for them. That's what happens sometimes, you play in an independent league if you've otherwise got nothing going on.

Independent leagues seldom get scouted, so if you're a former big leaguer who has hit a tough spot, you need to stay in touch. Call and let them know, hey, if you ever need a guy... I read about that somewhere. Tim Bausher played one game with the Black Bears and had his contract purchased by Milwaukee. Eventually, he made his way to Pawtucket.

So what happened after Pawtucket '06? The Reds, then the Rockies, who cut him after spring training camp. He wound up back in the Can-Am League, pitching for the Nashua Pride. The Royals bought him out of there in June of '07, stuck him on their AAA team where he sucked, then released him. Bausher returned to the Nashua Pride. No word on his plans for the future, but good luck!

Bausher alleges that his good friend Marc Deschenes said he'd also be interested in re-joining the Nashua Pride. They should also probably call up Mike Lockwood and Jim Buckley.

"Oh I forgot to mention I went to college with Tim Bauser in Kutztown. Cool guy. He was in one of my science classes and I hung out with him at a few parties. We started the same year and man is he tall. I met him freshman year and I thought he was a senior. He must have been 6'5 210 freshman year."

There is much going on this day. The bulk of Red Sox tickets are going on sale, McCoy's got the XMAS party with Meet the New People, Xmas at Fenway (I think).

I can't deny my excitement over Johan "JS" Santana. I mean... I love him. And not just because he's a great pitcher! Okay, it's pretty much only because of the Cy Young caliber pitching. But still. Santana in Boston and Katy bar the door.

At some point I'll do the "Most Fascinating Baseball Experiences of 2007 Alive As Experienced By Baseball Heavy". I don't want to give too much away, but don't be surprised if "Johan Santana Pitches Complete Game Shutout at Shea" is number one. Because that was awesome.

Also, Pawtucket Red Sox tickets go on sale on Saturday. I can't wait. I may wear a Santa Claus hat.
Posted by Jenks at 2:51 PM No comments:

Welcome to the Ocean State, Jon Van Every!

Jon Van Every (a lefty outfielder) has been signed by Boston and placed on the 40-man. He comes from the Cleveland system. Defensively, he's great, but he strikes out a lot... tends to swing for the fences. At 28, you need to be over this shit.

I barely remember Van Halen from this summer, but during one Bisons visit to McCoy he doubled and homered. In the same game, Kevin Cash played third base because Alex Prieto got ejected. Oh, minor league baseball!

All of this makes me wonder a few things:
1. Will Brandon Moss start the year in Pawtucket? Will he still play right field or is he now permanently a first baseman?
2. Ellsbury: Gone for good? The Twins have D. Lemon Young. Who else is a Minnesota outfielder? Cuddyer? No, the other guy. Damn, my memory's bad.
3. Who else played outfield in Pawtucket last year?
a) David Murphy, deceased.
b) Jeff Bailey, occasionally.
c) Michael Tucker, on good days.
d) Junior Spivey?
4. Junior Spivey!

There will be a player or two in Pawtucket on Saturday, so if Van Every's there I'll see what I can find out. If Kapstein is there, I'll give him a prayer card and shake his hand.
Posted by Jenks at 2:07 PM No comments: