Dustin Richardson was on the PawSox.

Although I have no real, lasting memories of the lad, I did do an entire post about him and said things like, "If Richardson walked into a bar with Tommy Hottovy, only I would know who they were and be able to tell them apart" and "Dustin Richardson's been called up? A lefty? Can we throw Hunter Jones in the Trashco brand trash receptacle now?"

Let's see what some of the kool kidz are saying!

2. "You know why America hasn’t reached Mars yet? Because man hasn’t pushed the limits of human endurance yet. Sure, maybe Dustin Richardson is a hero, or maybe, just maybe, he’s a true American hero." - Old Time Family Baseball

3. Come on, guys! I needed more than two interesting points of view!

I do find it wicked funny that Richardson's MOM talked to the Big Grey Paper. I mean, I would have died, and this is coming from someone whose mother did something very similar.

Anyway, I totally knew that guy was on something when he was in Pawtucket. What sober person gets their last name tattooed on their back in Red Sox font?
Posted by Jenks at 2:24 PM No comments:

2012 Pawtucket Red Sox Hot Stove Party: Why It Was Off the Hook

What made the 2012 Pawtucket Red Sox Hot Stove party the greatest one I have ever been to?

Was it:
a) Luis Exposito's Atwells Avenue hair
b) All the free Cheez Puffies you could cram into your wordhole
c) Free minty cocoa shots to stave off the brutal, stabbing ice wind
d) Heaven on earth for New England metal folding chair fetishists!

Okay, Luis Exposito's hair was a pretty big factor... Almost as important as Alex Wilson's ugly cowboy boots. Although his boots may be very nice, I don't know, I'm not from a red state. But the greatest thing of all was the Visitor's Clubhouse featuring a town hall-style forum led by Mike Tamburro and Lou Schwechheimer! It was the greatest thing I have ever seen! All you had to do was raise your hand and suggest something and the gents took it under advisement! Like the one guy who was all, "Yes, I have a question. The hamburgers suck!" And Mike Tamburro like, wrote it down!

It was terrific. There were some good ideas. One woman was like, hey, how about a pitch count on the scoreboard, WHICH WAS EXACTLY WHAT MY SUGGESTION WOULD HAVE BEEN!!! Who was this amazing mystery woman and why is she not my best friend and drinking buddy? (Note: they are working on it.)

The woman's response? "Like fifteen minutes before everyone else." What? What exactly is the point other than to just waltz in in front of everybody and flaunt privilege? There can be no other reason because why else would you want that? So you can piss in an unsullied toilet? So you can be first in line for a hot dog?

How about you just make yourself a pageant sash that says, "I GET TO GO IN BEFORE YOU"?

Mike Tamburro is the greatest. I wish he were my neighbor.

In a related story, new radio guy Aaron Goldsmith was out and about, fielding questions and shaking hands and whatnot. I sympathize with him a little bit, since Danny Hoard left some big pants to fill. Goldsmith may have a little edge in the moss department, though, because his hair is unstoppable. I am optimistic and look forward to the first radiocast!

Two things:
1. Games you might wanna check out include May 28-31 (Ron Johnson returns to McCoy Stadium as manager of the Tides), August 14-17 (PawSox play Scrankees as visitors in Pawtucket), and April 20-23 (Durham Bulls make sole visit to Rhode Island.) There may be others, depending on what you're into.
2. Alex Wilson was the least boring special guest player. Brandon Duckworth looks like he lost weight... Did anyone see that? Was it my imagination? HELLO?!
3. Arnie Beyeler said he knew who the PawSox 2012 hitting coach was going to be, but would not budge on details. Beyeler also looks trimmer. Also, if you know who Cookie Rojas is, damn! That guy must have spent 1000 hours at the gym.
4. I love that it was at night! The past couple of years it's been restrictively crowded and almost unpleasant. This year it was comfy, streamlined, organized. Terrific job, everybody.

Joe Morgan is an infielder/outfielder/manager who managed the Pawtucket Red Sox from 1974 to 1982. WHAT. Morgan was manager during the LONGEST GAME IN BASEBALL HISTORY in 1981. (Quit being so stubborn, Kenny, and read the book.)

Here are the win/loss records under Morgan:

The Syracuse vs The Providence 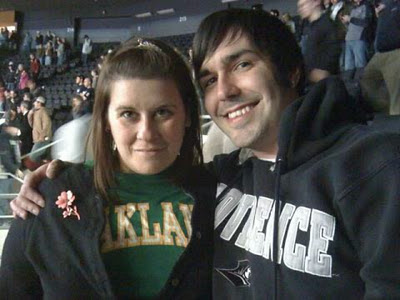 I've seen this game before: Providence gives Big East powerhouse a run for their money in the first half, struggles at the onset of the second half, comes back strong with six minutes left... Maybe even pulls ahead... And then loses. Oh, Providence.

The Syracuse fans reminded me of Yankees fans. PC fans are totally Chipster, though. I had a great time, but part of me was hoping for a surprise upset. That's me and Billy in the picture, at a different game with a happier ending.

Please enjoy the McGair story about the game, Cooley, Boeheim, and YOU GOTTA HIT THOSE FREE THROWS, FRESHIE!!!!
Posted by Jenks at 4:03 PM 2 comments:

How stoned is this guy?

"whats is everyones favorite fruit!!??"
Posted by Jenks at 10:01 PM No comments:


Today I learned of 12 minor league signings. Rich Hill I knew about a while back, and I was thrilled to hear of his return. Another welcome return is Brandon Duckworth, who pitched well in 2011 for the PawSox. And Tony Pena Jr's back! Nate Spears gets a fresh start!

I'm going to take a look at some of the other signings with help from some blogs I've come across.

1. LHP Jesse Carlson, coming from Toronto. Did not pitch last year, expects to be ready by spring. Would you like to see some pictures of him rehabbing? Also, BoSox Injection's Derek Stykalo takes a closer look. Okay, am I crazy or does it kind of look like the Berlin (CT) Patch broke this story? What a scoop!

2. RHP Carlos Silva - SCOTTPRIEST of TEDSARMY.COM says, "Fear not, Red Sox fans who think the rotation is not deep enough. Ben Cherington has saved the day with the signing of the mighty Carlos Silva."

3. RHKB Charlie Haeger - Back in July, "charliezink16" exclaimed, "HOLY F*CK no way, I fuggin love Charlie Haeger i'm speechless this is awesome haha, Haeger was signed to pitch in AAA and get Lavarnway some knuckleballs before going up to catch Wakefield, YUP" (Sox Prospects Forum)

4. RHP Will Inman - Looked around a little bit for some reaction or comment but I came up virtually empty-handed. So I give you this, from John Arguello of 'Cubs Den' -

"Inman was once a top 10 prospect with the Padres. He's a finesse pitcher who relies on control and command of his pitches. Oddly his walk rate has been going up while his strikeout rate continues to climb, all the way up to 9.23 last season. He's still young, actually younger than prospect Chris Rusin, and if he can find his control he can still be a useful bottom of the rotation starter. It doesn't make him better than guys like Rusin or Eric Jokisch, but he could add some depth and competition."

5. RHP Doug Mathis - Conor Duffy of Sox.Rox gets into it a little bit.

6. RHP Chorye Spoone - Start by reading this from Hardball Times. Then, check out this forum where Spoone's mother says: "The Orioles did offer Chorye a minor league contract but he decided that from the offers that he had...Boston was the best fit for him in the Relief role. While we will miss being able to watch him close by we wish him the best in Boston."

8. INF/SS Pedro Ciriaco - Nothing. Not one Red Sox blogger could throw together an analysis? A profile, a projection? A personality piece? Instead, here's 'Wiffleball Hero' from the ONLYBUCS.NET forum: "Sam Holbrook clearly doesn't get Pedro Ciriaco's speed. Pedro Ciriaco is Usain Bolt in stirrups out there! They said Bolt had a false start too. The fools. Nobody understands what guys like Bolt and Pedro Ciriaco are capable of."

As always, please refer to soxprospects.com for the best and most thorough information.
Posted by Jenks at 3:37 PM No comments:

Rick Miller is an outfielder who played for the Pawtucket Red Sox in 1970. At that time, the PawSox were Boston's double-A team. He was 22 years old.

Two things:
1. Rick Miller is now the manager of the New England Collegiate Baseball League's New Bedford Bay Sox! Guess who's checking out a new ballpark this summer!
2. Donald Dilly, Katsuhiro Shitanishi, Leslie Slough, John Mountain. Heard of any of these guys? They played with Miller on the PawSox. No? Then how about Carlton Fisk and Juan Beniquez!

Rick Miller's hard to find at McCoy, but I will make a point in 2012 to get up to the upper portion of the third base tower to pay a visit. I may also re-write "Celluloid Heroes" and make it about PawSox players of yore, such as Mr. Miller here...
Posted by Jenks at 2:05 PM No comments: