The 2013 Pawtucket Red Sox Hot Stove Party Featuring Jackie Bradley Jr and Nobody Else, No Sir.

Yesterday was the PRSHSP and let's face it, all the cold people were there to see Jackie Bradley Jr. And why not? Personally, I was there for free hot dogs. It's a nice break from all the porridge and hardtack I've been living on.

Once again, the greatest part was the Tamburro/Schwechheimer led Town Hall Meeting, in which the people in charge of this whole thing solicit suggestions and comments from fans. Again, some people tossed out good ideas and a few compliments. But of course you get FULL-GROWN MEN asking why they can't give free bobbleheads to adults instead of just 14 and under.

Jeremy Kapstein was on hand to remind everyone to buckle their safety belts. He also pointed out that Jackie Bradley Jr and his fiance are super swell folks who have been touched by the hand of god. Fiance looks all of sixteen, but they marry up early down south. 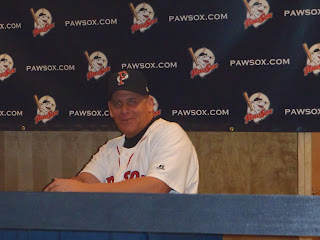 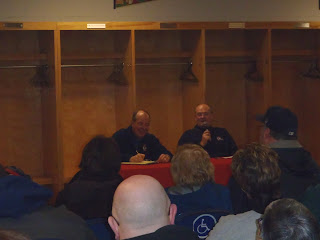 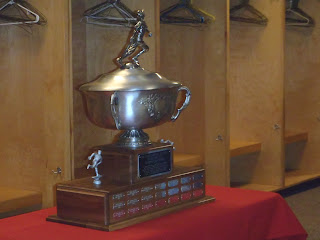 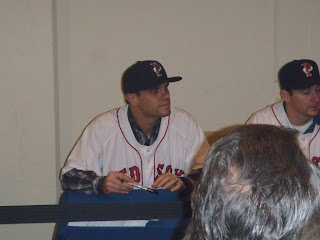 Someone hacked into my camera with a virus and downloaded my Jackie Bradley file gifs. I'm pretty sure that happened. I would have maybe recorded some Bradley Q&A, but that sort of thing was scrapped in favor of everyone getting autographs.

I won't stay in a world without Hyder.

Steve Hyder quit Pawtucket last month. I am not terribly surprised and kinda saw it coming. But what the heck? Who's going to fill his shoes and what will the broadcast sound like? I can't get to sleep! I think about the implications...

Some people find it helpful to make a list. I know I do, which is why my apartment is as neat as a pin without a speck of dust and my bed is always made and such. No crumbs in my keyboard!

Stump Steve:
1. "I did in nine years with the PawSox and 12 years overall, and it's kind of lost its luster,'' said Hyder. "I felt like I didn't get the respect at McCoy Stadium that I've earned elsewhere. Wherever else I go, I'm treated pretty well. I just didn't feel like the PawSox valued my services.'' (here) (True dat.)

2. And Hyder's writing a book! "I kept a very detailed diary of the 2012 season when they won the Governor's Cup, so that's what it will be all about." Can't wait to read it, seriously, and if it never gets finished I will pull his spine out through his butthole. (ibid.)

3. Adam Hyzdu wishes this could have happened sooner.

4. "I was insulted when I wasn't made the lead guy," he said. "I was told my play-by-play wasn't good enough. I'm a finalist for Sportscaster of the Year in Rhode Island again this year." Aaron Goldsmith, you carpetbagging ruiner.

5. Searched for Hyder stuff I'd written, came across this 'wacky' lineup I did last September. There it is, Jen. The funniest lineup you've ever written and no one was around to read it: 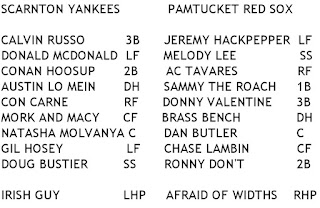 
Never had the chance to meet Steve Hyder, but I did get to meet players like Royce Ring and John Otness so I guess it all balances out.

See you at Hot Stove, which will by emceed by the next person I hate in my life.
Posted by Jenks at 11:08 PM 1 comment:

A long time ago, Gary DiSarcina became the new manager of the Pawtucket Red Sox. And Arnie Beyeler became the Boston Red Sox first base coach.

Since DiSarcina's local-ish, everybody knows him. I remember him best as an occasional co-host of Extra Innings on NESN. This may have occurred back when Bob Rodgers hosted and Tom Caron was doing Heidi Watney work on the field. My feelings toward Tom Caron have not thawed.

Here's a short thing on DiSarcina written by Scott Cordischi. Evidently, no one proofread it. Why not check out Over the Monster instead? Or PawSox Blog?

I look forward to meeting DiSarcina and working with him throughout the season. I know he will consult with me before setting the lineups and provide me with injury reports.

By the way, as I perused the articles on Gary DiSarcina I couldn't help but notice that some people should resolve to either use spellcheck or, say, review their work before submitting it. Come on, everybody. Step it up.