Catching Up with Shea Hillenbrand

In 2008, Hillenbrand was playing for the Atlantic League's York Revolution. An injury ended his season, and you don't have to be Kreskin to see that he's probably dunzo.

If you remember Shea for anything aside from his brainless steroid use and poor defense, it'd probably be his shitty attitude and great love of animals.

Oh, and here's the 911 tape of his wife calling for help after his son was bitten by one of his pet lemurs.
Posted by Jenks at 8:55 PM 1 comment:

1. "Do you remember Jim Buckley? What happened to him?" (note: Bailey and Buckley shared catching duties in 2006)

2. "Do they let you do your laundry here (at McCoy)?" (Note: I asked this because I'd been thinking earlier how awesome and convenient it would be if I had a washer/dryer at work and, hey, if you're a baseball player, YOU DO INDEED HAVE THAT LUXURY!)

There you have it! I'm a freelance sports journalist, Ma!
Posted by Jenks at 4:36 PM 1 comment:

I have thanked many people for their support and co-operation but I feel like I have overlooked the Sawhorse People.

The Sawhorse People are the many fine folks who wait patiently at the exits to get autographs from the PawSox kids. They can tell you who's in the house, who's gone, who's packing up their car because they've been released, who's an asshole, who's nice, who's new in town, who's rehabbing with the visiting team... all of that and lots of stuff I should probably never put in the blog.

Special thanks to "Buck" "Coats" and M. Timlin. And by the way? Bartolo Colon is awesome.
Posted by Jenks at 3:25 PM No comments:

for that #1 Kyle Snyder fan

I believe it is Cyn at toeingtherubber.com. Anyway, happy birthday or something. Good luck!
Posted by Jenks at 2:48 PM 1 comment:

so remember... out there somewhere you've got a friend

I had to take a break. Baseball is really hard!

Chris Carter and George Kottaras are collecting dust in Boston. I'm rooting for Tampa Bay but I still have love particles for the Red Sox. You know how it is?

I'm gonna move out of here. Can someone please take my cat?

Things I learned from the 2008 Kansas City Royals program

1. "Wrapped presents and/or gifts of any kind" are prohibited from Kauffman Stadium. Vis: "Please note that if you have a planned party of any kind that includes gifts, we advise either wrapping the gift item at Kauffman Stadium after the item has been inspected or place the unboxed gift item in a gift bag. Our security staff will ask guests to open any wrapped items."

2. Zack Greinke is a humorless asshole! Several players were asked, "If you decided to open a restaurant, what would you name it and what kind of food would you serve?" Greinke's response was, "I'm definitely not opening a restaurant. If I did, it'd have to be a smoothie place or a coffee place." Okay, thanks for playing!

3. The number 5 thing you need to know about LHP pickoff moves, according to first base coach Rusty Kuntz: "When looking at the left toe, if it goes up slightly, it means the pitcher's weight is shifting back to get something on his throw to first base for a pickoff move. If the pitcher's left toe remains on the ground, he is keeping his weight on the ball of that left foot in order to build up momentum to deliver that pitch home."

4. Reliever Ramon Martinez knows how to do several magic tricks and is learning to play the guitar.

5. The first pitch ever thrown in Royals franchise history was chucked by a guy named Wally Bunker on April 8th, 1969. Bunker is now an arts n' crafts guy.

6. Was Jose Guillen's dad abusive? "We knew if he caught us in a lie we were in trouble. I'd tell my brother that we'd need to get under the bed when dad was coming because he was going to get us. When you grow up in that atmosphere, you don't want to lie."

7. When asked what color their front door was, neither Kyle Davies, Alex Gordon, nor Joakim Soria knew the answer.

Thanks to Lucky, for picking up a program for me in Missouri. YEAH PEDRO!!!
Posted by Jenks at 1:57 PM 1 comment:

So that's it, I guess. Shelley Duncan the Great Ruiner with a tenth inning home run off Hunter Jones.

I've already begun planning off-season sports. I'm deeply involved with fantasy football (I think, I don't know, I don't like football which may be an advantage). People really LOVE attending sporting events with me!

Also, I'm plotting an art heist. You probably think I am kidding. But wait until you read the compendium of 2008's Dumbest Criminals where it says "The criminal was apprehended after local police read about her felonious plans on her public blog". 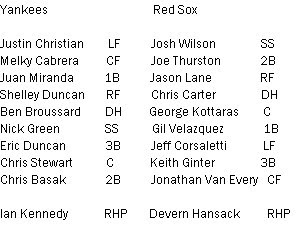 TERRIFIC game. Devern Hansack versus Ian Kennedy. Hansack needed to be real tuff for this game and he delivered... and then some.

Hansack pitched six no-hit innings for Pawtucket and it totally brought me closer to god. His only problem came in the fifth inning... he walked spoiled brat Nick Green, who advanced to second on a wild pitch. A couple of Yankees groundouts allowed Green to cross home plate for their only run.

Hansack had two walks and EIGHT mighty strikeouts. You's a superstar, boy, why you still up in the hood? I would have loved for him to stay in the game, but you could clearly see the effort was taking its toll. He was also on a pitch count after coming off the DL. But really, it may have been the performance of the yr.

Ian Kennedy was no slouch, either. Seven innings, two runs on five hits, two walks and five strikeouts. The weird thing is that it started with a Van Every walk in the third, like, when does that asshole ever walk? So, yeah, JV walks and winds up getting batted in by Jason Lane. And then in the fourth inning, wicked Italian Corsaletti hits a solo home run.

And so with a 3-1 lead in the ninth, big ol' country boy Hunter Jones goes u.d.t. on the Yankees and it was so spiritual. For Pawtucket fans. I hope it was degrading and demoralizing for Shelley Duncan et al.

what in the world is in that bag?
1. I thought the playoffs would bring a full house to McCoy. I was way off. The park's mostly empty. But the great thing is that the fans there are more hardcore baseball fans, not just a bunch of bored folk and their children. Which leads me to believe that 'playoff atmosphere' means more than just asses on seats.
2. You'd better believe they boo'd the shit out of Melky Cabrera.
3. Gil Velazquez at first again? Yes, and he plays a mean first base. It's all that damn racquetball.
4. As I was leaving, I walked by Charlie Zink getting his crap out of his car. No one noticed. Except me. I should have said hello.
5. Some old-timey PawSox fan was a few rows behind me... a treasure trove of retro baseball heckling. "THAT WAS A 400-FOOT DRIVE... 200 UP AND 200 DOWN!" Ha! Ha!
6. Less amusing was the borderline retarded sideways cap kid a few seats down. Like a wannabe gangsta kid who's probably too old for thick chains? Would not stop bellowing stupid crap like, "COME ON, UMP!!" Hey, d-bag: Your Jesus Christ tattoo on your leg makes Him look decapitated.
7. Kottaras annoyed me when he hacked at the first pitch in his first two at-bats. So much for progress.
8. Oneli! Six-finger satellite Oneli Perez got the last out in the eighth inning. So he's not dead yet.
9. Hansack had two outs in the sixth inning and powerhouse Juan Miranda coming up. RJ walked out to give Hansack the hook but Devern said he wanted to get Miranda. And it almost looked like it wouldn't work, because Miranda smoked a ball toward right field. Fortunately, Gil Velazquez made a crazy catch like over his shoulder and flipped it to Hansack at first. GREAT PLAY. Bartolo was strong, real strong. He doesn't look as fat in person.

I don't what more I can say. Thank you and good night? But first...

1. The Lehigh Valley Iron Pigs are hopeless. I cringed five times just watching. The fielding is probably the worst. RJ Swindle was the victim of some shoddy fielding... he was visibly disgusted.
2. And, lo, a vision appeared before me on the mound at McCoy Stadium. Matt Childers, Iron Pigs relief pitcher. So, so good looking. They. Cannot. Touch. Him.
3. As I was leaving the park, one of the players drove past me toward the exit. Totally smoking weed. He apparently could not even wait until he got on the highway! It was wafting out his slightly opened window... DAMN.
4. So some guy came and sat behind me and he was pretty annoying ("THAT WAS A STRIKE! COME ON, UMP!"). However, he sounded so much like the lead singer of Molly Hatchet that I couldn't be too irritated. I kinda wanted to turn around and shout, "Flirtin' with Disaster!!!!"
5. One of the Jeffs hit a home run. Pretty sure it was Natale, the Good Jeff. The Evil Jeff (Corsaletti) says stuff like, "When my hot girlfriend told me that the Sox drafted me, I was definitely excited to be part of an organization as prominent as them."
6. I will definitely try to go to Lehigh Valley next year. I just hope that sweet, sweet Matt Childers is still there.

Game one of the semi-finals tomorrow. I'm nervous.

By the way, Boston Red Sox, you can keep Van Every.
Posted by Jenks at 9:44 PM No comments:

Not the Admiral, the other guy.

Pardon me, but I object to this egregious corruption of the decimal system. That's almost as bad as saying 3.1 innings is the same as 3 1/3 innings. Which they do all the time.

The decimal system is honest and pure and true. I love baseball, but they shouldn't fuck with the decimal system. THEY COULDN'T HAVE USED A SLASH?
Posted by Jenks at 5:51 PM No comments:

No one deserves this award more.
Posted by Jenks at 11:46 AM No comments: 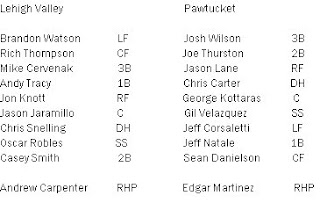 2-1 Pawtucket. Edgar Martinez continues to be an honest man on the mound.

Hunter Jones took over in the seventh and ran into problems, giving up a walk and a single and chucking a wild pitch homeward. He escaped, but gave up a run in the next inning when Iron Pigs DH Chris Snelling singled home Andy Tracy, who'd hit a double in his at-bat.

Team MVP Joe Thurston was responsible for the win. He hit a two-run homer in the third inning. Without him, Pawtucket is nothing.

That is all. I'm heading to the park for the last regular game of the season. Bartolo Colon is pitching. Can you picture that?
Posted by Jenks at 11:05 AM No comments: