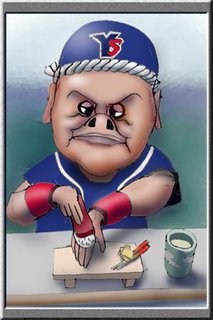 Do you remember Rhode Island Day at Fenway last year? Nah, me neither. Oh, wait... Hey! I was there with sister Lucky! Yes, it's all coming back to me now.

The little yellow anchor was waving proudly as we all saluted Roger Williams and religious freedom and the mighty Narragansett Bay. It was a day game in July, and damned if it wasn't Trading Deadline Day!

Well, we all know what happened that day, don't we? A lot of people were saying, "Oh, the people watching TV at home knew Manny was coming in before the people at the park did." WRONG!! First of all, am I ever at Fenway without binoculars? NO. And from my seat in the bleachers, I could see right into the dugout. Not only that, but this is something a lot of people saw coming very early in the game. I know Lucky and I talked about it. So take your turkey and stuff it.

The night before the game I had wanted to make myself a t-shirt that said FREE PETAGINE. At the time, he was a Venezuelan Brian Daubach ( before the onset of boozehoundery) and mashing hardcore at McCoy. And I loved him. So my mother, knowing I had very little time, offered to pick up some fabric paint for me.

Well, she did. Only it was puffy paint. Yes, I wore my puffy-painted FREE PETAGINE t-shirt that day like any middle schooler! AND I WAS WORKING IT!

Of course, it was not half as cool as being the second "T" in "TROT", but that's a different story for a different day. And I am having a hard time uploading pictures, so you'll have to wait for the bitchin' Japanese portrait of Petagine.

I only wish RP had had a few more PA's, but I understand that first base was crowded at the time. Best o' luck, Roberto.


PS No reply yet from Sean McAdam. But then, a watched mailbox never boils.
Posted by Jenks at 9:30 AM