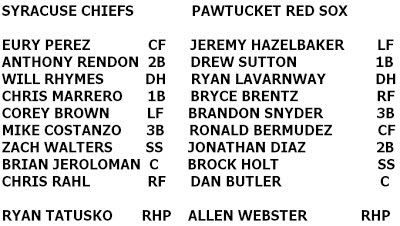 Pawtucket wins, 5-3. And 12,691 fans saw it go down. Fireworks. Allen Webster gets it, has a 5-0 record so far. I only mentioned that in case Brandon Crawford is reading.

Webster pitched 6 1/3 innings, gave up two runs on four hits. Webster gave up three bases on balls, which seems high for him. Although he's not De La Rosa, whose overall walks are the lowest of all the Pawtucket starters. Or Chris Hernandez, who has less walks through nine innings than anybody. Who cares though, the team won.

Webster struck out six Chiefs, so that was good if you like the K.

Starter for Syracuse was Ryan Tatusko. Tatusko pitched seven innings and was up to 110 pitches. He gave up four runs, three earned. Not a bad start but Pawtucket was just a little bit better.

The Chiefs scored first, when Will Rhymes hit an RBI double in the first. Rhymes really gets around, eh? Then top of the fourth, left fielder Corey Brown hit a solo home run to give Syracuse the 2-0 lead. Come on, Pawtucket.

The Red Sox tied the game up in the fifth, with a little help from Brock Holt's RBI double and something Dan Butler did, productive out blah blah blah. And then Pawtucket scored a run in the sixth, one in the seventh, and one in the eighth. Brandon Snyder got some hits, Holt did stuff, it was teamwork. Good team this year. I think everyone's really getting along.

Pedro Beato came in and got the save. Alex Wilson also pitched. Alex Wilson is the answer to Michael Bowden: People talk about talent and potential but there really isn't anything there. By the way, Bowden's in the Cubs org and just got sent to Iowa to do whatever. But he was in the Cubs bullpen doing his thing.

two things:
1. Brandon Snyder went 3-4 with a double. Holt got a couple of hits.

2. Ronald Bermudez started in center but left the game in the first inning. What happened? Bermudez and Hazelbaker collided, which I deduced from the game recap. What I want to know is who was at fault.

3. Second baseman Anthony Rendon is a BFD. Last night was his first game in triple-A and the Washington Nationals just love him! "I think he will be a quick-to-the-big-leagues guy as far as the normal course of a drafted player, but again, we're not going to put any stipulations on him, any timetables or anything like that, but suffice it to say we feel really good about this player, and it's a guy that we've thought about a lot, it's a guy that we've had at or near the top of our board for a long, long time, and we feel good about selecting him." - GM Mike Rizzo. Lifted from Federal Baseball.So... Is that really a sentence? COMMA MUCH?!

4. Rendon just had his wisdom teeth out. Awww.

5. Jason from Half Street Heart Attack talks about Rendon's time at Rice U. He wasn't there to learn, he just wanted to get drunk and major in business.

6. "[Holt] and Rubby have been the two guys for me who have really developed in front of our eyes,” PawSox manager Gary DiSarcina said, "So we went shopping for training bras at Ann & Hope."

TONIGHT. Or this afternoon. Rubby De La Rosa v Matt Torra... Don't do it, Jen... Just stop... You're not clever or original... TORRA! TORRA! TORRA! AAAAAHHHHGGHHHHHH Sorry. I couldn't help myself. And I try so hard not to be hacky like those fucking NESN suckas.

The day after this, I went to my only McCoy game of the year, seemingly causing you to disappear.

Anyway, get well soon. Until I hear otherwise, I'll assume you're getting one of those baboon hearts. Don't worry, they can love just like human hearts.