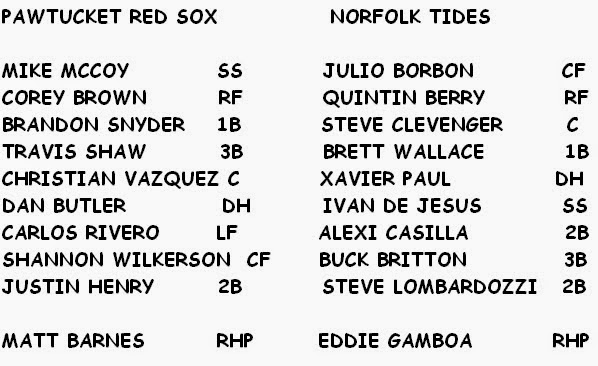 Norfolk is wonderful and you can, too! Tides take it 3-1. The Tides are the Orioles, if anything just in case, modefoque. And Pawtucket LF Carlos Rivero probably lost the game single-handedly.

Wow, I wish I were back down there... Watching the ships roll in. Chilling with Rocky Cherry and Jose Vaquedano and Travis... Travis... I'm blanking. The skater second baseman. Starts with D. Ferrying over to Portsmouth. And NAUTICUS! I threw blueberry fig bars into the water for the fish. I slept on the airport floor in DC. Well, "slept". I may have partied in a limousine with Ludacris and some roller in a white fur coat.

Eddie Gamboa pitched five innings and struck out seven PawSox guys, probably because Gamboa's a knuckleball guy. They got one run off Gamboa, but then Kelvin De La Cruz, Tim Alderson, and Evan Meek shut that shit down. Evan Meek, how'd you get in here?

So who wants to talk about the Pawtucket Red Sox generating a run in lovely, seaside weather while I'm toiling up here with no vacation in sight? Oh, me, absolutely. First inning, Corey Brown singles with one out. Brown stole second and made it to third on a passed ball, so that was helpful. Corey Brown would be a lot cuter if he wore glasses and read hardcover books. As it stands, he'll have to be cute enough running home on a sac fly. 1-0 'tuckets.

The Norfolk Tides scored three runs, then Tommy Layne came into the picture. Layne pitched the final two innings and allowed zero runs, but it didn't matter because the PawSox were not Coffee Achievers. And Chris Carter wasn't walking through that door. Furthermore, Carlos Rivero thrice appeared at the plate with two outs/RISP and could not deliver. NOT GREAT, BOB.

Christian Vazquez doubled in the sixth inning. That was as exciting as it got.

two things:
1. Is Tides infielder Buck Britton Drake's brother or something? Did the Brittons name all their kids after animals you blast shotguns at? Do they have a daughter named Grisleigh?

3. Holy fuck, if Johan Santana ever came to McCoy Stadium I would lose my mind: "Johnson [That's RJ to you, Flapjack.] said that could line Santana up to pitch for the Tides at home on Monday or Tuesday. On Monday, Santana was put on the club’s 40-man roster and disabled list."  - Excellent game story from David Hall.

TONIGHT. Chris Hernandez will be in Durham, being disrespectful to Nate Karns. Please turn to page Watching Durham Bulls Baseball for all your Durham Bulls needs.
Posted by Jenks at 10:55 AM