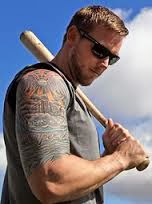 God damn, he's got a serious case of asshole face. I suppose I should give him the benefit of the doubt. You know what they say: Fool me once, strike one. Fool me twice, strike three.

Cousins is a 29-year-old outfielder who was drafted by the Marlins in '06. I am going to assume he's married, ladies, although he could be gay. He was born in Reno* and went to University of San Francisco, which I have never heard of. He's never played in the IL before! Betcha Hassan and Brentz are shittin' themselves.

Last year Cousins spent the bulk of the season on the Angels AAA team in Salt Lake City and found it best to strike out all the damn time. Without doing any research I am going to assume he was coming off an injury.

Giants fans may remember Scotty as the dude who busted up Posey's chifforobe in a 2011 home plate collision.  They're still pretty pissed off about that. I suppose the Toronto fans will little note nor long remember a similar incident with Ken Huckaby and Derek Jeter, eh?

Que mas?
1. This headline made me laugh a little: "Scott Cousins Set To Be the Pawtucket Red Sox Starting Center Fielder". Talk about presumptuous! Who wrote that, his mom?

2. Cousins received death threats, allegedly. Come on, guys. Yes, it was a dick move, but Giants fans have never been able to stop fellating Buster Posey.

3. "Scott Cousins represents something bigger than himself. Scott Cousins represents a concept, as many others do too. There are players for whom there's always an argument to keep them on the 40-man roster. At the same time, there's always an argument to kick these players off. Those players on the fringes are interesting in how very uninteresting they are." - Killer article by Jeff Sullivan on Lookout Landing.

4. A good name for a blog about the Giants is "They Most Decidedly Are Giants". It exists, too:

"Look, it’s hard to be a pro ballplayer. You’ve got to have the perfect combination of skill, timing and luck just to get a taste, and as soon as you do you’ve got to be good enough to ward off all the young, skillful, lucky guys coming up from behind. The mere fact that Scott Cousins has taken a big league at-bat puts him in an elite club.

Couldn’t have happened to a better guy."


It looks like I'm not going to get much beyond BusterGate. The Big Gray Paper has a lovely defense going, though.

Best of luck in Rhode Island, Scott Cousins!
Posted by Jenks at 10:55 AM