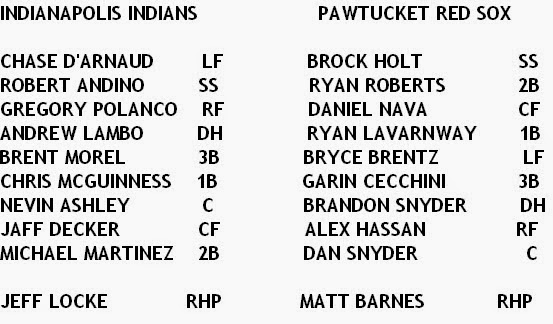 Indians take it, 3-2. The game was only seven innings long, called on account of fog. The fog was extraordinary, heavy with the sea, smelled of mollusks and ruffled sandy seaweed.

Sorry I was gone so long. I didn't really want to come back but my domain name came up for renewal so what the heck. Besides, I could really do some damage this season.

Starting pitcher for the Pawtuckets was Matt Barnes and his exciting right arm. Barnes pitched five innings, gave up one run and K'd six. Have you seen his picture? WHAT ARE YOU, SOME KIND OF TOUGH GUY? Barnes was in place for the win, but it was such a tight game and then Dalier Hinjosa blew the save and so forth.

Lefty Jeff Locke started for Indianapolis. He's still hanging around? Locke pitched like two innings then I guess decided he had something better to do. No, I don't know what happened.

In the bottom of the second inning, Alex Hassan hit an RBI single. Brock Holt led off the third inning with a single. That's when Locke was replaced on the mound by Phil Irwin, a big-shot movie producer. No, Irwin's a righty who says crap like "Watching the closing ceremonies, I hate when the Olympics end. Congrats to all the USA athletes for doing such a good job!" and retweets Jesus. And lo, Ryan Lavarnway hit an RBI double. 2-0 Red Sox.

The Indians hopped up on the board in the fifth inning by way of a sac fly. And then, sixth inning, Gregory Polcanco tripled to center. Andrew Lambo followed with a home run to pull ahead 3-2.

Vin Mazzaro got the last out of the game. It was the bottom of the seventh and Mazzaro got one out and then everybody realized you couldn't see the ball any more. I'll bet Jeff Levering loved this game.

two things about Matt Barnes:
1. "His fastball touches 98, but he relies on it a little too much. He has a good curveball, an average change-up, and he is likely to develop a fourth pitch. (Cutter or Slider) He has the ability to maintain velocity deep into starts, and he has good command."

2.  "He's a big horse of a guy, and the arm is definitely something to work with. I saw him both in warm ups and the game. He carried himself like a pro and even though his line that day was simply decent, he looked like a man among little leaguers."

also:
1. Drake Britton was called up.

TONIGHT. More Pirates minor league stuff. Indianapolis will start Jake Brigham, PawSox will present Brandon Workman. Should be a beautiful night, unless you're sitting near loud racists.
Posted by Jenks at 11:52 AM