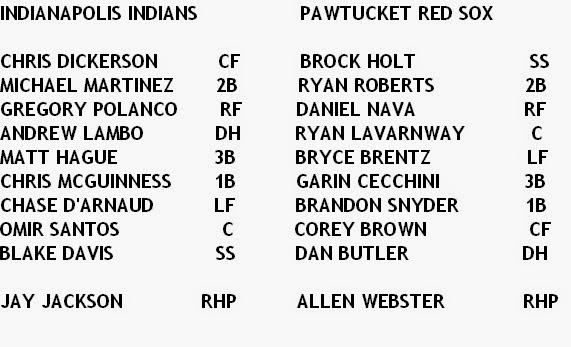 Starter for the PawSox was righty Allen Webster, who has a wicked bad temper but has never hit a lady. Webster gave up two runs on seven hits, pitched into the seventh inning OH MY GOD SOMEONE PLEASE CALL BEN CHERINGTON A PAWTUCKET STARTER WENT WAY TOO DEEP ALSO 98 PITCHES IS MENTAL.

Starter for the Indianapolis was Randy "Jay" Jackson. I suppose I would also go by "Jay" if my name were Randy Jackson. "HAY RANDY WHAT REALLY HAPPENED WITH MICHAEL HAW HAW HAWRRR"

And holy shit, a starting pitcher that's not white. In Rhode Island! I wonder how Jackie Robinson would regard the state of OB these days?

No, that's all wrong. The game was tied at one until the sixth, when Garin Cecchini hit an RBI single. The Indians tied it in the seventh, but the PawSox pulled ahead for good in the bottom of that inning. Doesn't that sound like something you'd do to check for gentleman cancer? THIS MAY, PULL A HEAD FOR GOOD!

What's with all the caps? I'M VERY INTERESTED IN SHOUTING. I'M MORE INTERESTING THAN A WET PUSSYCAT!

Seventh inning, Daniel Nava hit an RBI single. He did it for Jesus.

I wish I had a better outlet for my creativity than this PawSox junk. I need a real hobby.
Posted by Jenks at 1:02 PM

Hobby, who needs a hobby? We need better weather so we can enjoy cold beer.

Is not automated as it's with our automated machining possibility, so the quote would possibly take a day for human evaluation. With high-precision machining, the completed part lead-time can also be|can be} somewhat longer, with seven to 10 days as commonplace. We require a 3D CAD mannequin, along with a 2D drawing for GD&T tolerances. It might also mean that we transcend our commonplace slicing device set and use machining processes corresponding to wire EDM, EDM gap popping, grinding, and boring to satisfy your part high quality necessities. A CNC Programmer works with machinery which cuts uncooked materials into functional Fishnet Stockings objects. They are answerable for deciphering project blueprints, designing applications and setting up machines to produce the part outlined in the program.