Toledo wins, 4-0, on the back of beloved minor leaguer Mike Hessman. Mike Hessman forever, man. I should have stayed after the game so I could talk to him. And the Mud Hens aren't coming back so there goes my opportunity.

Starting pitcher for the Pawtucket Sox was Brandon Workman, who pitched very well indeed. I know, he gave up four home runs. But he was throwing strikes? Yeah? Plus he had to face Hessman who truly could not be tamed.

You know who looked better? Kyle Lobstein. That little lefty got nine K's and didn't allow any runs through 6 1/3. He threw 100 pitches, DAMN SON!

Here's a picture of The Lobster: 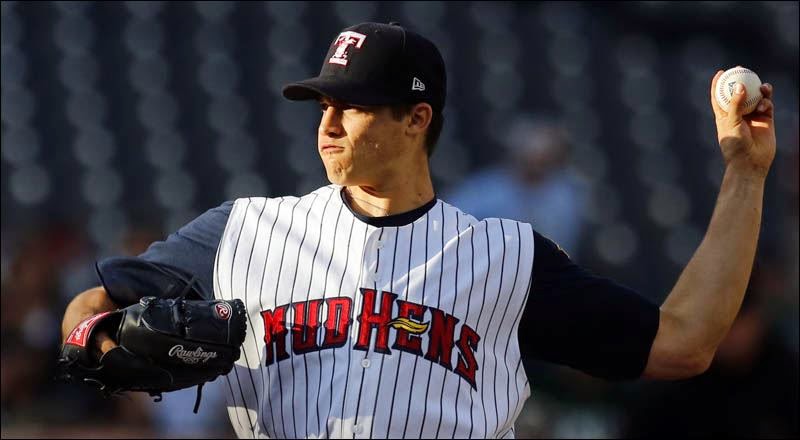 I was at this game! A baby came as well, he seemed pretty absorbed in the game even though he is only eight months old. I didn't see the rooster guy, though.

I'm talking about this game even though it's a few days old because it's probably going to be the Last Good Game. If you haven't noticed, I am dying of boredom here.

. . . Kyle Hardthrowingstein" - Genius comment on the Bless You Boys Lobstein breakdown. Read it!

2. Dan Butler was the catcher in this game. I want me and Dan Butler to get an apartment together. I think he could help me quite a bit with my finances. He could be my life coach. He could be my personal trainer. In return I would allow him to have sex with me most nights and the occasional morning. And he can watch whatever he wants on television. NO SMOKING/PETS.


3. Ryan Roberts hit a double and Garin Cecchini hit a double. So Cecchini has a brother named Gavin who is also a baseball player? Revolting. I hate you, Cecchini's parents.

Hey, great to have you back for another year. I don't what they had you do in Spring Training, but it's really paying off so far during the regular season.