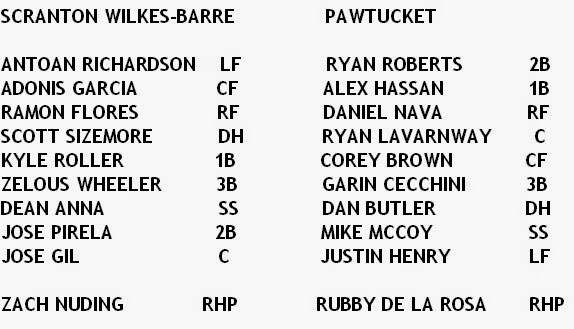 My favorite PawSox is the one with the biggest you-know-what. OPS is what I mean.

No, I'm not serious, Mike McCoy is pretty ugly and also a prude.

I'M BUSTING, MCCOY. You're hot and probably the easiest lay on the team.

PSYCH! Lavarnway's hot because he hit a home run, but also he's not that great-looking. Word on the street is that his you-know-what is really small.

His OPS, I meant.

For real, though, my favorite PawSox player is Jeff Levering. I heard he needs help taking his clothes off.

No, sorry, that's not what I meant. I was referring to Dan F. Hoard, former radiocaster and now champion of Cincinnati.

WHUUUT DAN HOARD IS NOT EVEN A PLAYER?!? That's because my favorite player is Cecchini, because his teeth are astounding and he gets on base but is probably not as good a fielder as Angel Chavez was or maybe not even Gil Velazquez.

Forget it, Garin Cecchini is such a boring choice. The truth is I don't have a favorite player, but if I did it wouldn't be a jackass like Drake Britton or Alex Hassan.

Yankees win, 3-2. Let's talk about that instead of being scandalous.

Starter for the Pawtuckets was Rubby De La Rosa, of the Virginia De La's. Lovestruck was his mode. Took a look, dropped my textbook...

De La Jenny pitched five innings, gave up nine hits and struck out 8! So his pitch count was probably like 165? I'm assuming Rubby was done after five. Look at him go, look at him go! He gave up two runs, but looks like Rich Hill was the guy who ruined everything.

Starter for SWB was Zach Nuding, who I hate based on his eyebrows alone. Zach Nuding has asshole eyebrows. Nuding pitched 5 2/3 and also allowed two runs.

Get in the car and don't touch nothing. Sit in the car, let's discuss something. THE OFFENSE!

The revolting Yankees started first, and I swear I will never go to their horseshit ballpark. First baseman Kyle Roller led off the second inning with a triple, so bully for Roller. Although he's a fairly recent AA call-up, so I guess he's doing alright for himself.

Roller never made it home, though, because Caucasian shortstop Dean Anna grounded into a fielder's choice. DEAN ANNA PITCHED ONE TIME. Some other stuff happened, catcher Jose Gil hit a two-run single to center that perhaps could have been a double for a non-catcher. 2-0 Scranton.

Pawtucket picked up a run in the third inning by way of a groundout. It was terribly boring. Ryan Lavarnway tied it with a solo home run in the sixth. Say, does Lavarnway still have that dumdum mustache? Because it's so bad.

Game ended when Cecchini grounded into a double play with two men on base. Loss goes to Hill, win goes to reliever Pat Venditte.

two things:
1. Dalier Hinjosa pitched a pair of scoreless innings, so that was nice. Did you know Hinojosa was from "C'uba"? Additionally, it looks like Drake Britton and Alex Wilson are sort of closers. Guh, they deserve each other.

3. "The triple was a gapper thart could have been caught: No jump at all. Double was a soft liner past cicchini that should have been stopped. He plays way too far off the line and the single was a bouncer up the middle." - JackieWilsonsaid

In fact, here's the poetry and insight of Sox Prospects user JackieWilsonsaid in its entirety:


Just back from paw sox.

Not a lot to see here.

All the taaa filler is exactly that.

Lacarnway looks very bulky yet his at bats are weak.
The hr was left field linens barely out.

Cechhini needs to hut exceptionally well as his d is non existent. At 3rd and hopefully you may be able to hide him in left.
No not at all
Thereof runs were scored on a single.

There were no running catches in the if.

One ball was a legit double.

When he bears down the fastball pops and the change is silly .

When he doesn't early on counts the ball is in play.

Nava is lost down here and was the only of with any d.

His status is sad
4. Headline says "Venditti" because there is no true justice in this world.
5. And then there's "Vidette".

RailRiders. Wow, I am such a fuckup. Not the Yankees, the RailRiders. I guess I'd better get my pay docked! Oh, wait, I don't get paid! I make zero point zero zero dollars doing this!

I could make money with some clickbait? EIGHT PAWSOX PLAYERS YOU DIDN'T KNOW WERE GAY

Tonight the RailRiders are still in town so you just enjoy that and shut your fucking mouth. I'm going downtown to get drunk.