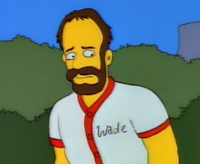 Wade Boggs is a third baseman who played for the Pawtucket Red Sox in 1980-81 from ages 22-23. As of this year, he is in the IL Hall of fame, which is located nowhere. Come on. Even Canada has a sports hall of fame. It's darling!

But if you insist on knowing my bliss, I will also point out that Boggs led the entire league in AVG, hits and doubles. You should have known by the tone of my voice, but you didn't listen.

Two things:
1. Wade Boggs is the motherfucker who tied the game in the 21st inning of the LONGEST GAME IN BASEBALL HISTORY.
2. In spite of being a golden god in Pawtucket in '81, Boggs was not called up.

Wade Boggs is in lobby of the first base tower. Not his portrait, it's really him. He's been waiting forever for you.
Posted by Jenks at 2:24 PM