it's hard to find something good to say about JV 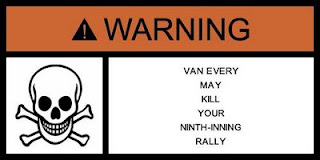 OK. I've never really talked much about Jonathan Van Every, mostly because he's an asshole who strikes out way too much. I mean, I hated Chad Spann, but at least I haven't heard about him being a dick to the fans or anything. The worst thing I could say about Spann, aside from his diminished skills, is that his nickname is Hopper Grass and he hangs out with Moss and Lester and goes skeet shooting or whatever.

Jonathan Eugene Van Every was born in 1979. His life prior to being drafted 29th round by CLE (2000)is of little import. He's from Mississippi, so I reckon he spent most of that time drinking Busch by the old swimmin' hole.

In 2008, Pawtucket was blessed with Van Every as the new center fielder, replacing Mostly Ellsbury. In 380 ABs, JV struck out 157 times. He walked 54 times and stole 6 bases. So? That's striking out 41% of the time.

1. A website is selling Van Every's used road pants for $131. Wow! Does he get a cut of that?
2. Van Every was named IL Batter of the Week for W/E 6.22.08.
3. JV attended the 2009 Rookie Career Development Program, which he described as an 'honor'. I'll bet it was wicked boring. You can watch the video if you look around for it. He does pronounce 'Pawtucket' correctly, which is more than I can say for the freaking GM.
4. Van Every also adds that you have to tip pretty much everyone you come in contact with. Drivers and clubbies and handlers and doormen, all of that. I say, just hire a valet! It pays for itself after nine months!
5. On July 13th of last year, Van Every had a home run call reversed in Virginia. It was ruled a foul ball. He hit a for real homer in the tenth inning of the same game, helping his team to a 2-1 victory over the Tides.

Okay, I guess JV isn't such a monster after all. I mean, who among us can say they've never been a jerk at one time or another?

Except me. I'm nice to everyone, every day.
Posted by Jenks at 2:29 PM

I regret my comments about Mississippi. I don't want any part of typical northern prejudice.