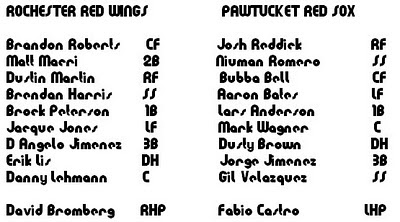 6-5 Red Sox. I might be more impressed with this win streak if they weren't playing the worst team in the division six games in a row. However, well done, guys.

Fabio, say do you remember? Castro was hit like a piñata by Rochester, like eight times. After five innings, the Red Wings had four runs up, including home runs by Brendan Harris and Brock Peterson and that was it for Castro. Don't feel too bad for him, though - He got the win after Pawtucket magically changed the score from 4-2 to 6-4 in the fifth.

Ah, the fifth inning. So pivotal! Red Wings starter David Bromberg was working what would be his final inning of the night. Velazquez led off with a walk, but stupid Josh Reddick grounded into a force out. Sorry, that was a gratuitous shot. Bubba Bell walked a spell later and Bates hit a ball really high and really far and you know that house-like concession stand in the outfield? Yeah, it scraped that thing and it was a home run. Has anyone ever hit it over that thing? Yes, reportedly, but I haven't seen it in person. I don't think.

Nobody scored again until the eighth inning, when Dusty Brown hit an RBI double, because that's his thing, he hits doubles. Two doubles in one night for Brown! DUSTY'S BACK!

Fernando Cabrera stepped in to close the whole thing out. Usually, watching Cabrera pitch makes me wanna blast off in my seat but he was looking rough last night. His hair's getting too long and he looked tired... Whatever, still hot and I would still hit it seven days, twice on Sunday. Cabrera gave up a run, of course, but nailed it down and W! W! W!

Poor Rochester. People like me who have feelings are saddened by their nasty losing streak. You wouldn't understand because you're all jaded and angry. Me, I send fruit baskets to the guys after a good game. Have a Bartlett pear, Mark Wagner!

two things:
1. I am going to do a separate post about classic Pawtucket pitcher Manny Delcarmen. It's... hrrrmbbllle... AHEM. Sorry, I cannot go on right now.
2. Bubba Bell and Lars Anderson each hit solo home runs for the Red Sox. Sorry I didn't mention it before. I was too busy thinking about... AHEM! God damn it...
3. Michael Bowden came in after Fabio Castro and I still do not get it. Bowden is not any better than someone like Chad Paronto. Please tell me for the one-hundredth time what a great, young pitcher he has. The potential! Bowden worked 1 2/3 innings, walked a couple of guys, gave up a double to D'Angelo Jimenez, and struck out three. Strikeouts are cute, but kinda overrated.
4. No hits for Niuman Romero. None for Jorge Jimenez, either. Jorge Jimenez has existed this year, but I would easily forget him if someone asked me to list everyone on the team. List of Accomplishments: Played third, existed, had a cool at-bat song.
5. Jacque Jones has some of the worst at-bats I've ever seen. I don't know anything about mechanics, but he's hacking and flailing... His stat line isn't bad, though, so maybe he's all over the place like V. Guerrero but can still make good contact. Yeah, that just happened. I compared Jacque Jones to Vladimir Guerrero. Why doesn't anyone stop me from blogging? Why hasn't anyone intervened?
6. I also feel that way about karaoke. I can't believe people let me get up and sing. It's a disaster every time. SOMEONE NEEDS TO STEP IN AND SAY, 'JEN, THAT'S ENOUGH.'
7. "Kyle Waldrop needed just 18 pitches to throw two shutout innings." - from SethSpeaks.net
8. Nice mustache, Anthony Slama.
9. D'Angelo Jimenez ran through a third base stop sign in the second inning... It was pretty funny.

Tonight! ME. IRON PIGS. And Drew Carpenter! And some dude who wears ugly t-shirts.