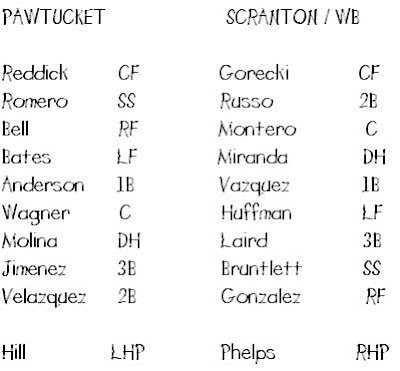 6-1 Yankees. Rich Hill could not do it like he did it last time. The Yankees got nine hits off him and scored five times. Hill couldn't get out of the sixth inning.

Today I would rather play solitaire than do this, but here goes. David Phelps got the start for the Yankees and pitched eight tight innings, throwing 95 pitches. Pawtucket only scared up one run on five hits. Nothing exciting, just Jimenez grounding out in the second inning after a couple of singles. Congratulations, Phelps. You beat the PawSox.

So back to Rich Hill. He only had one run going into the sixth inning. Hill walked Miranda to get things started then gave up a single to Jorge Vazquez. Laird and Bruntlett hit consecutive RBI singles. Edwar Gonzalez TRIED to follow suit, but Bubba Bell threw him out at home, which must have been cool even though the inning had already gone to pot.

Chad Paronto... I mean, who doesn't like Paronto, but he's no Robert Manuel. He's not even Fernando Cabrera. Paronto had a couple of runners on for Reid Gorecki, who decided it would be a great time to hit a double. And he did, scoring Bruntlett and Gonzalez.

Paronto also gave up a home run to Vazquez in the seventh to make it 6-1. Yeah.

Pawtucket really could have used Darnell McDonald this year.

comatose tomatoes:
1. Chad Paronto is also no Santo Luis, who pitched a clean ninth. Aside from the walks, that is.
2. “Phelps had great command and threw the ball well,” Yankee manager Dave Miley said. “He did a good job of using all his pitches.” - from the Wilkes-Barre paper. Thank you for the world's most boring post-game comment, Mister Miley.
3. David Phelps is Irish and he hates walks.
4. Scott Walsh filled in for Donnie Collins. Thanks for ruining my day. Walsh's live blog includes stuff like this: "Sorry for not updating sooner. Working on some stuff for the newspaper." Okay, thanks!

The Red Sox are back in town and playing Syracuse. So enjoy these last two games.
Posted by Jenks at 8:06 AM