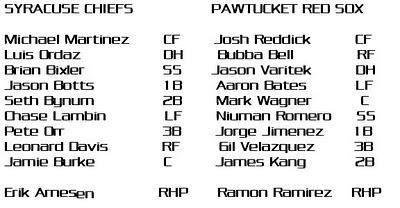 Syracuse starter Erik Arnesen pitched the entire game. He threw 125 pitches in a game that didn't really count for anything. The Nationals must really hate him!

Arnesen got three strikeouts and walked three. His bad, bad inning went down early, in the second. Jimenez walked and dashed over to second on a wild pitch and second baseman James Kang hit an RBI double. So simple.

Josh Reddick followed all that up with a two run homer to make the score 3-0. The Red Sox slapped a fourth run onto the pile in the fourth, when Jimenez led off with a triple and Velazquez doubled to get him across home plate. Yay?

Pawtucket starter Ramon Ramirez pitched himself 5 2/3 innings and gave up those three Syracuse runs. Only two were earned, because in the sixth inning, Ramirez tried to pick off Brian Bixler TWICE and messed it up, allowing him to skip over to second base, then third. How embarrassing.

Relievers Tommy Hottovy, Chad Paronto, and Fernando Cabrera finished the rest of the game. Then everyone cried.

feelings:
1. Dusty Brown wound up playing left field from the fifth inning on. It was Brown's first time playing left this year and his first time in the outfield since one game on the Sea Dogs back in 2006.
2. Bubba Bell and Mark Wagner both went 0-4.
3. Pawtucket finished the year 66-78. In 2009, they finished 61-82. So... slight improvement, but possibly a much less interesting team. No Maldonado or Sean Danielson. No Marcus McBeth or Javier Lopez. And no Ron Johnson.
4. I watched Gil Velazquez tossing squishy balls into the crowd and they traveled so far. And it just seemed so effortless. It must be so cool to be so athletic, for all that stuff to come easily. It reminded me that even guys like Paul McAnulty, Ivan Ochoa, Jorge Jimenez... They might look like a bunch of dum-dums but it's not easy and it's nothing that most people could ever do. What I am trying to say is that FUCKING GIL VELAZQUEZ, I AM GOING TO MISS THAT GUY.
5. Some people got called up, but no one I really like. Ryan Kalish was exciting in Pawtucket, but his stay was far too brief.
6. Some Erik Arnesen stuff here. He mentions his wife and you know what they say about that!
7. More on Arnesen from HHOTF. Good blog, good writer, hate the name of the blog.
8. Pete Orr and his mustache homered off Ramirez. So did Jamie Burke... Jamie Burke is older than I am. He was drafted by the California Angels, is how old Jamie Burke is. He played on the Edmonton Trappers, is how old.

Tonight! FREEDOM!!!!! No more Kris Johnson and Aaron Bates. Thank you all for coming. I'll do some end of the year stuff soon.