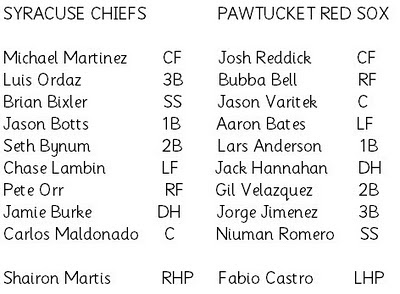 Castro's humble peasant start was suppressed in the fifth inning, when the Chiefs hit a couple of RBI doubles following a Chase Lambin walk. A third run scored in the same inning when center fielder Michael Martinez singled to score Burke.

Pawtucket had scored once in the second (Aaron Bates led off the second with a triple? YIKES.) and once in the third (Varitek sac fly), so after that Syracuse run-scoring nonsense in the fifth, the Red Sox were behind 3-2.

But Bubba Bell ignited an auspicious beginning to the bottom of the fifth when he walked, moved over to second on a Varitek single, and trotted over to third on a Bates flyout. Bell crossed over when Lars Anderson grounded into a force out and the game was tied at 3.

TJ Large took over for the seventh inning and managed to not make an ass of himself. The same cannot be said for Michael Bowden, who came in for the seventh and then immediately gave up a double to Brian Bixler. Bowden then threw a wild pitch, walked Jason Botts (Botts got caught stealing, though), and after Seth Bynum's sac fly scored Bixler... Chase Lambin. Home run. Jumping clothespin Jesus. 5-3 Syracuse.

Pawtucket tried to make it happen in the bottom of the eighth and somehow scored a run on a walk, a single, and some ground balls, but it was not enough. The proletariat uprising was quashed once more by the iron fist of Syracuse relief pitching. Oh, hell.

DTAMFS:
1. How long are people going to continue to pretend that Michael Bowden is useful and effective and has great stuff? Why is this guy so untouchable? How has he escaped criticism? No one ever says very bad things about him. I am mystified.
2. That's it.

Last game of the season. See you there.
Posted by Jenks at 7:25 AM

There are still huge Bowden fans out there? That's confusing. He's definitely stalled at Pawtucket - he's like the right-handed Abe Alvarez at this point, and the bullpen conversion hasn't really took. He could be a #3 to #5 on a bad team, but he has no future with the Red Sox, and it wouldn't surprise me to see him released after 2011. (I figure he sticks around next year as the "break glass in case of emergency" starter.)

Who's left on the Pawsox roster now anyway? I saw that Lars Anderson and a bunch of other guys were started in Boston tonight.