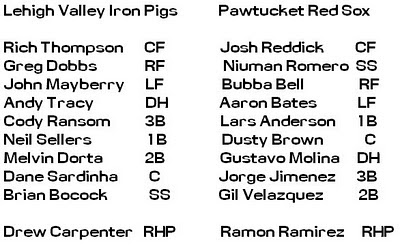 9-3 Lehigh Valley, who came on pretty strong toward the end. The Iron Pigs scored eight of their nine runs in the last four innings.

Pawtucket starter Ramon Ramirez 5 2/3, four runs on seven hits. Only two of them were earned, though, so he can use that thought to console himself as he weeps into his flannel teddy bear. While Ramirez was pitching the top of the sixth, Iron Pigs center fielder Rich Thompson stole second and third base, allowing him to cross home plate when Mayberry singled.

That's all for today, I think. Sorry, completely out of time!

Wait, I have a few minutes! Lehigh Valley plastered TJ Grande for four more runs in the eighth inning, when slugger Andy Tracy hit a grand slam after Large intentionally walked John Mayberry to load the baes. Wait, I thought Large was done for the year? Santo Luis got the last five outs of the game, but not without giving up that ninth Iron Pigs run. Booo.

gorditas de migajas!
1. Drew Carpenter is a Dirtbag.
2. Rich Thompson wound up going 4-5.
3. Dusty Brown got his first steal of the year last night! One of his teammates must have said, "Dude, I will give you a hundred dollars if you steal a base tonight." Wish I could have seen it.