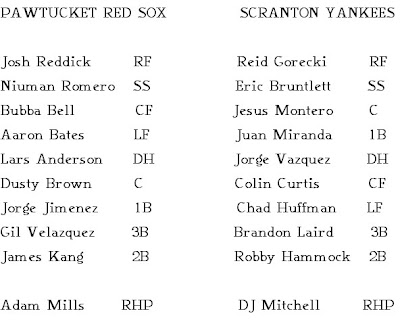 10-4 Yankees. Adam Mills had his head ripped off by the end of the first inning.

It all started when the rather fancy Reid Gorecki led the whole damn game off with a triple. You can't do that! You have to ease your way into the game! Triples don't belong in the first inning. A home run, sure, but a triple?

So right fielder Gorecki triples, Eric Bruntlett singles to center so he can score. And then of course the next batter is Jesus Montero, who never mind what I said... I can really hate this future NY guy. Montero: Home run. 3-0 and no outs yet.

Mills finally squirmed his way out of the first inning. In the second, Mills gave up a sixth run when Juan Miranda hit an RBI single.

Pawtucket scored their first runs in the third inning. when Bubba Bell hit a two-run double off Scranton starter DJ Mitchell. They picked up a third run in the fourth when Velazquez hit an RBI double. But SWB was unstoppable. Three doubles in the fourth inning led to an 8-3 score and Mills was removed in favor of TJ Large. Yuck!

Large pitched for 2 1/3 innings and the Yankees smacked a couple more runs off him, because Large is not that good at anything. He's going to turn into Lincoln Holdzkom if he's not careful! Pawtucket did push out one more run in the seventh, but they were seriously cashed.

DJ Mitchell wound up pitching just five innings before being replaced by Zack Segovia. Mitchell gave up seven Pawtucket hits. He balked! He threw a wild pitch! His pitch count was up to 92! RED ALERT! ERROR! ACCESS DENIED! ACCESS DENIED!

I think we're done here. Eff you, Yankees. Moosic's a shithole and everyone knows it.

today is a wonderful day and i feel great:
1. DJ Mitchell's a n00b. It's only his second full season of pro ball.
2. Did I mention Chad Huffman's HR? Or Vazquez's? Yeah, that happened.
3. Bubba Bell went 3-5 with a double and 2 RBI, so he gets the most beer.
4. SWB is playoff bound. I hope Columbus maces them good!
5. Donnie Collins! "I don’t think I’ve ever seen a game where a center fielder has dove so much and missed the ball just as often. Bubba Bell is really giving it his all out there, but the Yankees are smashing Adam Mills."

Tonight! Refereshing Rich Hill v one of the Phelpses. Geez, I'm almost done for the season.