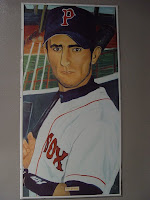 Nomar Garciaparra is an iconic shortstop who played for the Pawtucket Red Sox in 1996, with a smattering of rehab-style games in 2001 and 2004. He was only 22.

It's 1996. Stand by for adventure! I'm sure the music people (God bless them, if I had to play half the crap they did I'm not sure I could live with myself) were playing Seal's cover of 'Fly Like an Eagle'. Can money pay for all the days they lived awake but half asleep? Garciaparra was standing Rhode Island kidz on their ears with his offense.

Two things:
1. Former PawSox manager Buddy Bailey had this to say about the Garciaparra trade in '04: ""You know the organization has done what it thinks is in the best interest to try to put the right pieces together for not only this year but down the road. And, put us in a position to win a world championship. The decisions are based on the well-being of the club and that's why GMs make the decisions." [sic] - Providence paper
2. "Nomar showed up for work with the Triple-A PawSox about thirty pounds heavier, all muscle. Hits that had gone “crack” the year before now went “woomph.” He had 16 home runs in 43 games with Pawtucket before getting hurt, and everyone knows the rest of the story." - from Mike "Mount" Ashmore's Thunder Thoughts WHAT ARE YOU IMPLYING, ASHMORE?!1!!!ONE!

Nomar Garciaparra's exquisite mural is located in the lobby of the first base tower. It does not do him justice, as he is easily one of the Red Sox players I most wanted to have intimate relations with. Yeah, I said it. So fucking hot in his day. I saw him stretching out in left field during my first ever spring training game and I almost blacked out.