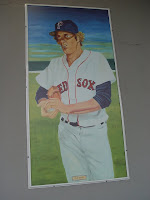 There once was a time when baseball players weren't interchangeable meathead jocks with crappy taste in music and an inflated sense of self-worth. At least, that's how I see it. (Not you, Abe Alvarez.)

In '82, MF got 19 starts and went 6-8 with two complete games. On July 1st, he faced Columbus opposing pitcher Dave Righetti and it brought the fucking house down. Fidrych pitched the whole game to a Pawtucket win over the Clankees. And it was baseball nirvana in little Pawtucket for the record crowd at the old McCoy. AND I MISSED IT!!! (Watch the video, Rhode Island people. It will knock you out.)

I have to stop, this is too hard. I imagine this will easily be the saddest mural profile I will do. Endless thanks to Lil' Rhody Dan for letting me use his superlative McCoy snaps. Pay your respects in the middle of the first base tower.
Posted by Jenks at 1:47 PM