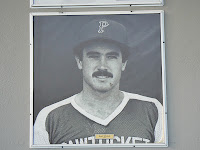 Reid Nichols played the outfield for the Pawtucket Red Sox in 1980. He was a 21-year-old baby boy.

Two things:
1. "...Reid Nichols, now at the AAA Pawtucket farm club of the Pawtucket Red Sox, is rated as the most likely non-pitcher to crack the 25-man Boston roster next season." - Ocala Star-Banner, AUG 1980.
2.

"Steve Lyons recalls playing center field early during his rookie season, and calling off the right- and left-fielders on various fly balls, only to have them step in front of him to make the catch. Lyons was abiding by the rule of thumb that corner outfielders defer to the center fielder, but teammate Reid Nichols set him straight, telling Lyons that he had to “gain their respect.” Said Lyons: “I’m like, ‘While I’m gaining their respect, are we going to fuck up a few balls in left and right field?”

- The Baseball Codes (Not really PawSox related, but like you care.)

If you get so lonely when Reid's not there, go see his mural in the middle portion of the home plate tower. Above photo graciously and charitably loaned by JS of the RSFPT Foundation.
Posted by Jenks at 2:28 PM