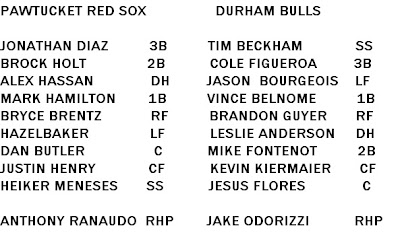 Pawtucket wins a squeaker, 2-1, in what was truly a defensive game. Good thing we've got Holt. It was pretty exciting, wish I could have been there.

Starter for the PawSox was Anthony Ranaudo. Ranaudo worked six innings, threw 92 pitches, gave up one run on four hits. Ranaudo gets a no-decision for this one. Not that anyone should care, since these are irrelevant playoff stats.

Young righty Jake Odorizzi started for Durham! Odorizzi was a total badass on the mound, pitching seven scoreless innings and striking out PawSox batters over and over and over. Seven times! Charlie Montoyo was all about it, letting Odorizzi throw 107 pitches. Gary DiSarcina must have been all amped up.

Unfortunately for Jake, his relief failed him. Jake Beliveau got a big Pawtucket mud-caked boot in his word hole and essentially ruined all of Odorizzi's hard work.

The Bulls led 1-0 for quite a while, starting in the second inning when catcher Jesus Flores hit a sac fly to score Mike Fontenot, who might be THE Mike Fontenot. The Cubs guy, right? Ask him how Joe Crede is.

The Red Sox got a couple of singles and a walk off Odorizzi, but could not make anything happen. That is until the eighth, when they were fortunate enough to face Beliveau. Justin Henry, who can handle more positions than the Kama Sutra, led off with a single to right. Henry scooted over to second base when Heiker Meneses was hit by a pitch, and this is where Bulls fans were like uh-oh.

Next batter was beloved infielder Jonathan Diaz, who was man enough to lay down a sac bunt and do it successfully on his first attempt. MENSCH. Everyone advanced, it was fricking genius. And then Brock Holt, who was everywhere in this game playing his little heart out, hit a ground ball to short that was deflected by Fontenot. Henry scores! Meneses scores! 2-1 Pawtucket! WAO!

So Beliveau got the gate and Steve Geltz came in to face Alex Hassan. Holt was caught stealing and Geltz got Hassan to fly out.

Bottom of the eighth, Ryan Rowland-Smith to face 1B Vince Belnome, RF Brandon Guyer, and slugging DH Leslie Anderson. Rowland-Smith walked Belnome, who's a first baseman so obviously he was replaced by a pinch runner. Rowland-Smith hit Guyer with a pitch and this is where PawSox fans that are on 95 South listening to the game on their car radio were like uh-oh.

THIS IS WHERE SHIT GETS REAL. The next batter was Leslie Anderson and I know you remember him. He was an IL All-Star last year. But Durham manager Charlie Montoyo took him out! And replaced him with the much-lighter hitting Evan Frey, so he could bunt. Frey was decidedly not up for the task and just struck out by missing the bunt. Montoyo must have had a quiet stroke over that boner.

Rowland-Smith collected himself enough to get the next couple of batters out. Then, top of the ninth, Hazelbaker doubled with two outs and reliever Adam Liberatore IBB'd Dan Butler. Henry reached on an error and things got exciting again, but Liberatore K'd Heiker Meneses to terminate the threat.

Last chance, Bulls: Anthony Carter in to close things out. Carter got the first out, but then gave up back-to-back singles, with the runners advancing on the throw from Henry. Next batter was IL Repeat Offender Jason Bourgeois. Carter intentionally walked him to get to Shelley "Wendall" Duncan. This kind of thing makes me very nervous, but I guess they know what they're doing. Duncan popped out, Guyer flied out, and Carter got the save. Incredible.

Win goes to Alex Wilson, who was in there somewhere.

plop, plop, fizz, fizz:
1.  Odorizzi is quite gracious: "(My outing) didn’t go to no avail. We had our chances, we had plenty of chances to tie it up, but things just didn’t go our way.” (R Cory Smith)

2. Holt, Hazelbaker, and Henry got two hits apiece. Alleged power hitters Hamilton and Brentz both struck out three times. Once again, production from the bottom half of the lineup. I LIKE IT.


4. "In the seventh, Pawtucket center fielder Justin Henry made a two-out diving catch of Jason Bourgeois’ drive with two Durham runners on board. This came after the first two Bulls batters of the inning were robbed of singles by Holt. In the eighth, the first two Pawtucket batters reached against Jeff Beliveau, with Justin Henry slapping a single and Heiker Meneses hit by a pitch — both on 1-2 counts. The runners moved up on Jonathan Diaz’s sacrifice bunt before Holt delivered on a 2-2 pitch.

“That guy was their hero,” Montoyo said." (Bob Sutton)

5. "Why don't people go to Durham Bulls playoffs games?" They don't go to PawSox playoff games, either. David Fellerath gets into it a little.

6. Jeff Beliveau is from Rhode Island? That explains so much: "The last time Rhode Island native Jeff Beliveau was on a pitcher’s mound was an inning back on September 4th. Before that, he hadn’t pitched for the Bulls since August 22. So when he came in after a very fine 7 innings by Jake Odorizzi, I was worried. A single, hit batsman, sac bunt, and two-run single later the Bulls were behind 2-1 and Steve Geltz was in to finish the inning. Too late." (Chris Wise, WDBB) As always, I love the charts and graphs.

7. "Both Pawtucket and Durham, the Tampa Bay Rays' top affiliate, sent former first round draft picks to the mound Tuesday. 6'7 righthander Anthony Ranaudo, pitching a day after his 24th birthday, delivered six solid innings for the PawSox, allowing just four hits and a run. In the second inning, Mike Fontenot doubled to left-center, and would later score on a sacrifice fly. That was the only blemish on Ranaudo's night, but Bulls starter Jake Odorizzi was even better, holding the visitors scoreless through seven innings, on just four hits." - Jay Miller never says hello to me, so I would like to point out that his article has a buttload of typos.

9. Here's a complete background on Brock Holt, who I never cared about until last night and now he's all I can think about. BROCK HOLT!

10. Rick Medeiros knows what time it is!  " I have seen a lot of baseball and other sporting events in my young life, but I can not recall any as exciting as game one of the Governors’ Cup Championship series last night here in Durham, North Carolina! It was a perfect day for baseball. The Triangle Red Sox Nation were on hand to cheer the PawSox to victory. The sun was shining and it was hovering just around 80 degrees. "

11. Eddie Pannone is going to put me out of a job! "Ranaudo, after a shaky outing against the Red Wings last time out, pitched brilliantly. Despite some early struggles he pitched more effectively as the game went on. He was very efficient and had some quick innings to keep his pitch count manageable. He too allowed 4 hits and a walk in his outing, striking out 4 Bulls."

Tonight is going to be very, very difficult for the Pawtuckets. It's Steven Wright vs oh, only the IL Pitcher of the Year, JD Martin. Good luck! My heart can't take it...