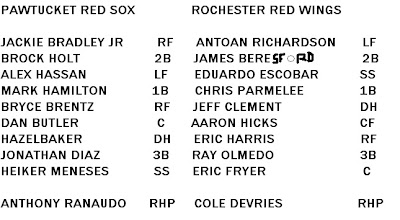 New York is beautiful this time of year! Pawtucket got crushed, 7-1, mostly thanks to Ranaudo having an off night. He only pitched two innings on account of sucking. In fact, after the game he found a note on his hotel door that read, "You guys SUCK! You can never pull together as one and revenge us. That is why you SUCK!"

Red Wings relievers Aaron Thompson and AJ Achter wrapped up the remainder of the game.

Rochester second baseman James Beresford, who is probably not British, went 4-5 with a double. DAMN SON.

A bunch of relievers finished the game for Ranaudo: Zinger, DLT, Carpy, and Webby.

two things:
1. Nicholas RW Henning talks about Beresford and his older brother, who did some pitching in the Brewers system.

2. "The Wings played as if the weight of the baseball world was off their shoulders. They had scratched and clawed just to make the postseason, clinching on Monday only after polishing off Scranton while wild-card leader Norfolk fell to Durham." (Mandelaro) I'm impressed by the Red Wings appearance in the post-season. The team has not been good for a few seasons, so it's great to see them. I always dug Rochester. Great park, too.

3. "PawSox starter Anthony Ranaudo struggled, and was chased without recording an out in the third inning, and reliever Brock Huntzinger didn't fare much better, as the duo combined to allow six Red Wings runs over the first 3.2 innings, while throwing the rather incredible total of 105 pitches over that span." - Jay Miller! Where the hell's he been all season?!

4. Brendan McGair is not a fan of the IL playoff format: "Common sense suggests that this is a flawed system, not mention that it flies in the face of conventional playoff wisdom. Cutting to the chase: McCoy Stadium should be open for business Wednesday night." It's kind of a ranty article and all I see is McGair feeling stuck at his job.

TONIGHT. Clay Buchholz pitching for Pawtucket, still in New York. PJ Walters will do his thing for Rochester.

Pawtucket has no fear of the underdog. That's why they will not survive!