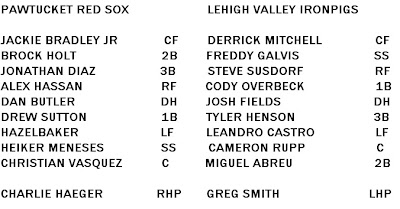 PawSox win, 4-0 over the Lehigh Valley IronPigs over there in Allentown, where there's corn and airports and affordable housing and the star of Bethlehem and lager. And Lager. This country was promised to me from the start.

Starter for the Phillies was lefty RJ Swindle, who gave up ten hits through seven innings. There is plenty to criticize. Like the picket fence of runs in the core innings. But not the relievers, who Pawtucket could not score on.

The Red Sox scored their first run in the fourth inning, when Jonathan Van Every and Travis Denker hit back-to-back singles to lead the inning off. A sac bunt by third baseman Gil Velazquez advanced the runners for Bubba Bell, who hit a sacrifice fly to score Van Every. One nothing, I want to call you and tell you that I'm a fan.

Fifth inning, Jeff Bailey led off with a single and advanced to second on a balk by Swindle (a near miss or a close call?). And then hopped over to third when Chip Ambres grounded out. Josh Wilson walked, Van Every singled to get the run across.

Sixth inning, third run for Pawtucket. Sean Danielson singled to right with one out. Catcher Carlos Maldonado doubled to put two runners in scoring position. Aaron Bates singled to center, scored Danielson, but the torpid feet of Maldonado could not quite get over the dish and he was thrown out at home, shot down like a juggernaut. 3-0.

And run for cover, there's a big one coming: The Fourth Run. Seventh inning. Alejandro Machado led off with a single. Swindle got the next two batters out, but then Jim Pankovits singled. Rodney Nye also got a base hit, but his led to the fourth RBI. 4-0.

How can I do this better? Are you out there? Do you hear me? Can I call you? Do you still hate me?

drank a beer, felt the chill of fall:
1. DON'T RUN ON DANIELSON!

4. "Have you ever been to a game, and some guy on the visiting team just annihilates your team? Like gets on base 3 times, or hits a crucial home run off your reliever, whatever. And you think, wow, that guy's awesome!

Then like a few months later you meet someone who's a fan of that visiting team and you're like, hey, what about what's-his-name? He's a killer!

And the fan is all, what are you talking about? That guy sucks! And sure enough, you look it up and the player is terrible. It just so happened that he had a good night v. your team."

"I'm cool with it, though. I'm going home to be a dad again. My son doesn't know I'm coming home yet, so he'll be pleased. Plus he's only 5, can't read yet, so he won't read what I'm saying now. It's going to be a surprise. That will be fun."

He's only five. It's going to be a surprise because he's not reading the sports page over coffee and eggs in the morning.

No game tonight, but then I guess tomorrow is the first playoff game v Rochester. No way, that can't be right. Wait... Yes, the lowly Red Wings are the Wild card winners. Chris Basak must be so excited!