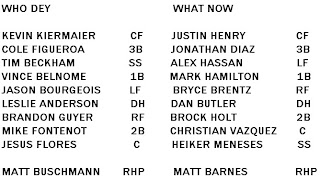 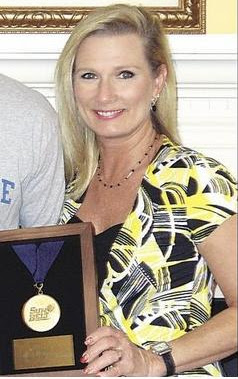 Durham Bulls win 2-0 in 14 innings. Brock Holt might get some blame but not from me. That is because I have eyes. And I don't care how hard Brentz slammed his bat down after the game, he played like an asshole. Just like in the Championship Game last year!

Starting pitcher for Pawtucket was Matt Barnes. Barnes was fine, pitched 5 1/3 and struck out seven. And then the rest of the bullpen came in and worked. Everyone did superlative work. Anthony Carter pitched the  ninth and then came in for the tenth, which is unusual but Carter responded by being a total badass.

Ryan Rowland-Smith pitched 2 2/3 innings of relief, allowed no hits and struck out four. I had to single out his exemplary leftiness.

Starter for the Durham Bulls was Matt Buschmann. Buschmann was terrific.

You know what, you can read a box score and if that's not enough you can read the newspaper. I'm not going to break down every hit (not many), every bunt (many), every strikeout, every reliever. This is a gestalt thing, and as a citizen of Rhode Island and as a Fan of Baseball I think I can say that this is the greatest baseball game I have ever attended. Some people said it was not that exciting. But those people probably have much more interesting lives than I do. To some people, it was some baseball game they were at that lasted a long time and  no one hit a home run.

Thursday night I went to sleep around midnight. I knew my alarm was going off at 4:30 in the morning but I can't do much about that, Thursday nights are sacred to me and I'm not one to turn in early. Of course, just like high school Sunday nights, I lay awake with non-stop music in my head (HOW DO YOU DO, MM HMM, I THOUGHT WHY NOT NA NA NA NA) and watched moths smashing themselves against my screen while I tugged the sheets back into place, over and over. So maybe 75 minutes of sleep?

Went to work for six because evidently I am an oil rigger. It was fine, I wrote on my take-out coffee "IF YOU THROW THIS AWAY I MIGHT DIE", did officey things and split. Went home and tried to nap but just as I was slipping through the narrowest passage of the hourglass I snapped awake. Debated between game t-shirts (Ottawa Lynx or Mike Lowell Marlins?) and I was out the door.

I expected minimal attendance but instead there were crowds, kids, bicycle messengers, punks and high school dropouts. Like a regular Friday night at McCoy, but different because people cared about more than cotton candy and foam claws. Perfect, right?

I wanted a good game. I knew a good game was likely. But I am wrong about so many things and I have seen so many flat, dawdling PawSox games that I couldn't hope for too much. All I wanted was not to be anesthetized.

Oh, well. Durham got the win. They earned it. Walking back to my car I ran into an older couple who were very zen about the whole thing and asked me if I was coming to the Saturday game. "Charlie Haeger", the gentleman said. Yes. I have seen the mongoose with the golden eyes.

some people are saying this isn't the first time you've had sex with a married councilman:
1. Slept until noon today. Feeling melancholy, like a Bryan Ferry cover song. I thought I would make a million new friends last night but no. Whatever, I have my books and my poetry to protect me.

2. I did quite like it when Hazelbaker got into it with Bulls shortstop Tim Beckham. Beckham would fucking crush Jeremy and I'm a pacifist but I would have thrilled at that spectacle. Hazelbaker is like the opposite human of me. And then I feel bad because maybe Hazelbaker got bullied for being a pale farmer.

3. "Where the ball stayed on the ground, sparks did fly late in the contest. [Groan.] Bulls shortstop and former Rays top prospect Tim Beckham jawed with both DiSarcina – both during a pitching change and in between innings – and Jeremy Hazelbaker after tagging him out trying to steal second base in the 10th inning.

The latter confrontation, in which Hazelbaker turned around to face Beckham, caused dugouts to partially empty before umpires cut them off near the foul line and sent them back." - David Carty, maybe.


4. "After taking the first game of the International League Governors' Cup series in Durham against the Bulls, the Pawtucket Red Sox find themselves with a chance to even their best-of-five series with a win at McCoy Stadium Saturday. Or, they can call it a season." - Ugh, seriously GoLocalProv? This is the best you can come up with? I get more of an emotional response by looking at beige carpeting.

5. "When a game goes on and on and on the way this one did for almost six hours, all sorts of statistical oddities start showing up. We’ll get to some of those, but first a tip of the hat to the eight Durham Bulls pitchers who, even if they provided too many thrills (that would be you, Kirby Yates), did not allow a run over 14 innings that saw 57 Pawtucket batters come to the plate." Chris Wise, you really should have figured out a way to get to RI.

6. Stacy Long wrote about the game a little, but she's more of a Double-A Montgomery expert. BOOM, female sports writer. Although Stacy's also a boy's name?

7. "The Bulls were limited to just seven hits, and none of them were actually in the 14th. Kevin Kiermaier reached third base on a three base error by Bryce Brentz, and he came home to score on a Brock Holt throwing error after a Cole Figueroa intentional walk. A walk to Vince Belnome advanced Tim Beckham to second base, and Jason Bourgeois beat out a potential double play ball while Figueroa crossed the plate with the second run. In the bottom half of the inning, a hit batter and back to back walks with two outs loaded the bases, but Yates struck out Brentz to end the game." - D Rays Bay

Slow computer, I'm out. Gotta shave my legs and head to the park and run up to Brentz and hand him a chocolate gun. Paz afuera.

I wish I could have (gotten to Rhode Island, that is). As it is the Bulls broadcaster went nuts. So I'd guess that he'd agree with you re greatness. My prediction is that tonight will be a blowout...just don't know by whom.