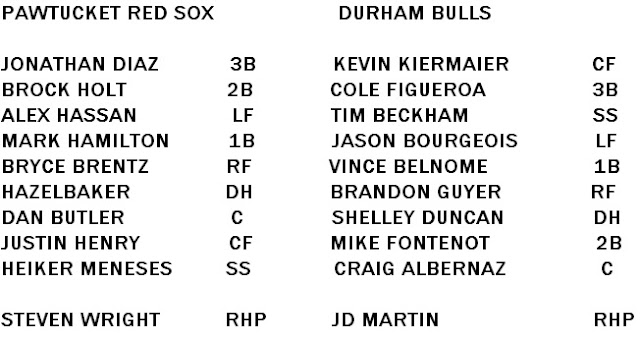 Durham wins 2-1, which is good not bad because this is super cereal. Did you know that I do not know how to type?

Starter for Pawtucket Red Sox was Steven Wright, and damn it, Wright did a fantastic job. He surpassed my expectations completely. Wright pitched into the seventh inning with the game tied 1-1, got Mike Fontenot out, faced localish catcher Craig Albernez, who hit a ground ball that Heiker Meneses could not handle (drawn conclusion, I was not there). Albernaz to second.

Next batter was teen heartthrob and center fielder and leadoff batter Kevin Kiermaier. Kiermaier and his dazzling smile doubled to left, scoring Alby (he said I could call him that). Kiermaier tried for third, but he's just a baby. Hassan to Meneses to Diaz at third to get him out. Montoyo perhaps scowled. Again, I wasn't there.

Chris Martin entered the game to finish off the seventh, which he did, and then also pitched the eighth inning. Sick bullpen, brah. Martin didn't give up any runs, but the Red Sox bats could not help him and it was like burning inside. Like running upstairs.

JD Martin Bulls Starter pitched six, gave up a run on four hits. Catcher Dan Butler and CF Justin Henry led the third inning off with back-to-back singles (Meet attractive singles in YOUR area right now on backtobacksingles.com!) Heiker Meneses, the PawSox infielder Jorge Jimenez always wanted to be, bunted the boys over for Jonathan Diaz. People helping people. Diaz did not get a hit. Diaz grounded out to the pitcher, 1-6-3, Butler scores.

The next batter was Hazelbaker, who struck out on three pitches but not before bending over to pick up his burrito and splitting his pants open.

No, next batter was Brock Holt. Holt worked his way up to a 2-2 count but ultimately flied out to left.

Durham relievers CJ Riefenhauser and Kirby Yates stymied the PawSox for the rest of the game. Tony Thomas jumped in for Hazelbaker and it would have been nifty for him to do... Something. But.

This game had the same score as the first one, but it took a half hour less time to play.

deux choses:
1. No hits from Hamilton, Brentz, and Hazelbaker. But unexpected contributions again from the non-sluggers. Perhaps the he-men will fall in line back home.

2. Three passed balls on Butler. Wright K'd six and walked three. I expected more runs from the Bulls, didn't you?

3. "[JD] Martin said despite a lack of run support, he felt comfortable on the mound. 'It is what it is. If they don’t hit, we just have to pitch. You look at the guy they had tonight, a knuckleball pitcher. That’s hard to hit. ... I don’t know how the hitters approached it, but I was looking at it like, ‘I hope he’s not on tonight.’ And he was.'" - R Cory Smith

4. "Durham Bulls center fielder Kevin Kiermaier stopped thinking about the dancing knuckleball thrown by Steven Wright. That approach might have helped him drill a game-winning double off the wall in left-center field in Wednesday night’s 2-1 victory against the Pawtucket Red Sox in Game 2 of the International League finals at Durham Bulls Athletic Park.

'My previous three at-bats I think I was thinking too much. That last at-bat I’m not sure what I was thinking. That’s probably why I hit it so well. I just swung and I didn’t know what was going to happen.'” - Bob Sutton, whose game story is tight. He could not help himself, however, with "Bulls don't knuckle under."

5. "The Bulls boarded a pair of charter buses after Wednesday night’s game for the 670-mile trip to Pawtucket and will take today off to rest for Game 3 on Friday at McCoy Stadium." Are you kidding me? BUS TRIP? Judas Priest! They couldn't spring for a $99 flight? Playoffs? At any rate, Jimmy DuPree's recap is decent in spite of the dreary architecture of his soul.

6. "But first the pitching. J.D. Martin might have been missing his regular catcher, Chris Gimenez, but he and Craig Albernaz made one heck of a team through the first six innings. The IL’s best pitcher only allowed four hits and one run, although he had to leave the game with a no-decision. Martin is a seriously crafty guy that the PawSox found themselves unable to hit well all night. And then there were the two foul pops that Albernaz grabbed in the 6th to end Martin’s 104 pitch outing. And Albie's hard running to first that might have encouraged the PawSox's throwing error in the 7th." - Chris Wise, WDBB

7. LOL Chris Wise: " Just what kind of strings did the PawSox management have to pull to set up Friday, Saturday and maybe Sunday games in Pawtucket?" Yeah, no kidding.

8. Cliff Barnes: "Jason Bourgeois led off the sixth with a line single to center and advanced to third with two outs. That’s when the Bulls were visited by lady luck. A wayward knuckleball got away from catcher Dan Butler, his third passed ball of the night. Bourgeois scored to tie the game and kept IL Most Valuable Pitcher J.D. Martin from taking a hard-luck loss."

9. That's what I said! "Pawtucket’s offense continued to be quiet against Bulls pitching late in the game. The PawSox were able to get hits but weren’t able to string anything together, a trend that has become a theme in these playoffs. Another troubling theme for Pawtucket has been a lack of production from the middle of the order, as the combination of Alex Hassan, Mark Hamilton, and Bryce Brentz have combined to hit under .200 through 7 playoff games." (Eddie Pannone)

10. By the way, have I mention Bull City Summer? Yes? Dive into the story of Tuesday night's game aqui. Stand right up and let it shoot right through you.

Off night tonight, then Matt Barnes will face righty Matt Buschmann, who says crap like "Aaaand I have the whole theater to myself for a viewing of Pacific Rim. Awesome. Opening my candy bag as loud as possible." Wow, I can't even rip on that. Buschmann seems to have a handle on basic grammar and spelling. Astounding.