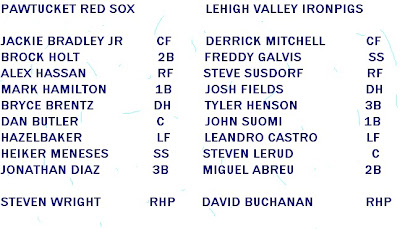 Pawtucket wins, 5-0, in a game that got rained all over so they only played six innings. Or five and a half. The IronPigs essentially said, you know what, it's shitty rain out and who cares and we're not even going to finish the rest of the inning. Good night.

Starter for Pawtucket was Steven Wright, who pitched five scoreless innings. Wright got the win, since no one else pitched and, well, you know how baseball works.

Righty David Buchanan, who says crap like "This cab driver said he used to pitch fast pitch softball at 85mph...... Ummm no you didn't", started for the IronPhils. Buchanan only gave up one run until the sixth inning, when everything started to fall apart.

Next up was Hazelbaker, who got the IBB to load the bases. But then Buchanan hit Heiker Meneses with a pitch, bringing Hamilton in for another run. And then Diaz grounded out, but that scored Butler.

Jay Johnson! Johnson faced Jackie Bradley Jr and guess what happened? HBP is what. And then Johnson walked Brock Holt, forcing another run in. Happily, Johnson struck Hassan out to end the game. That was painful.

two things:
1. Buchanan went to Georgia State U, and someone kind of interviewed him? It's paraphrased.

2. "The 24-year-old Buchanan was on his way to his sixth straight solid start Sunday night when he allowed two hits, four runs, walked two and hit a batter in his final inning of the season as Pawtucket claimed a 5-0 decision in a game cut short by a heavy thunderstorm after 51/2 innings.

"I didn't like the way the season ended today, obviously, but that's just the way the game goes sometimes," said Buchanan (4-2), whose final Triple-A ERA shot up from 2.11 to 3.00 in that last inning. "But overall, I'm happy with it. But I got a lot of work to do and a lot of things to get better at." (Schuler)

In a related story, I should take like five minutes to thank all the Noise Nation people for being so great and welcoming when I was in Allentown. I had such a great time hanging out and meeting everyone (EVERYONE) and not only does their ballpark smell like warm cinnamon, but it's fun and friendly and just terrific. I want to go every year. STROGANOFF STRONG!!!

TONIGHT. Today? Charlie Haeger v Greg Smith. And that's it for regular season baseball. In the minors. On the plus side:

"When the dust settled from the draft, Spicy Monster Mash were left on top. Their starters project out to score more points than any other team this year. Coach Jen S. made some savvy pickups in BenJarvus Green-Ellis, Greg Olsen, and DeMarco Murray. Green-Ellis was Spicy Monster Mash's best pick in the draft, adding the expected value of a pick taken 40 spots earlier."