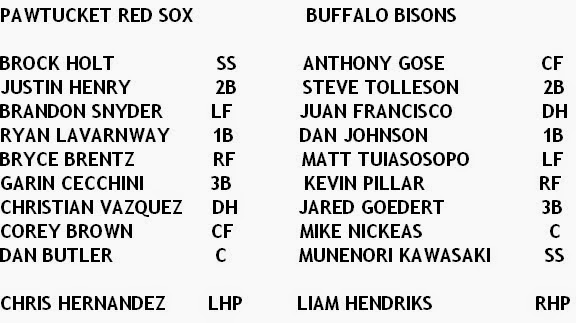 Tough luck starter for the Pawtuckets was lefty Chris Hernandez. Hernandez pitched six innings, gave up three runs on five hits. He only threw 87 pitches, 52 counting as strikes. He must have looked pretty good, right?

Fabulous married man Liam Hendriks pitched 5 2/3 innings, didn't give up any runs and only allowed one hit. And that man was Garin Cecchini. VIVA CECCHINI! Do you think he'll be in Pawtucket all season? He is on the 40-man roster. Okay, let's not be coy, I see him in Boston at some point... And not just a September appearance, either.

Buffalo struck first on the scoreboard, when second baseman Steve Tolleson hit an RBI single in the third. In the fourth inning, Hernandez walked left fielder Matt Tuiasosopo. And then Kevin Pillar tripled to center... Jesus, Corey Brown, where the hell were you? Pillar made it home at the next at-bat, when third baseman Jared Goedert, who says crap like "Miley Cyrus touted as artful expression and Phil Robertson silenced." singled to left. 3-0 Bison(s).

The PawSox didn't score until the eighth inning, when ill-fated reliever Marcus Walden was pitching. Walden got Cecchini to strike out, but DH Christian Vazquez doubled to center, which was a nice situation for catcher Dan Butler. Butler homered, which is exciting to someone, somewhere. 3-2 Pawtucket.

Righty Chad Jenkins came in for the ninth inning to shut the door on Pawtucket. Bryce Brentz was the last guy to hit and he struck out. Nice work, Buffalo.

two things:
1. Sorry, I have company.

THIS AFTERNOON! Mas Buffalo. Lefty Sean Nolin will attempt to take down Allen Webster. Disfrute!
Posted by Jenks at 10:44 AM