4.4.2014 Lehigh Valley IronPigs, Pawtucket, the Rain, the Park, and Other Things. 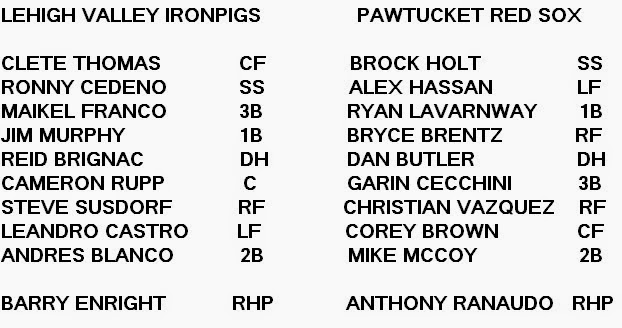 Pawtucket WINS! 9-4, probably because I wasn't there to ruin it. Craig Breslow gets the win in relief. It was pretty close, Cla Meredith was warming. I've never met Kyle Simon, but he took the loss for Lehigh Valley.

Starting pitcher for Pawtucket was Anthony Ranaudo. Ranaudo threw 73 pitches through four innings. The IronPigs scored four runs off him.

Barry Enright, who says crap like "Why are there SO many seashells in Florida sand!?", pitched four innings and gave up four runs. After he walked off the mound, he pointed at Ranaudo and said, "Twinsies!" Enright started the fifth inning, but Pawtucket whacked the moles out of him.

Things looked dire for the PawSox in the third inning. Clete Thomas singled and stole second base to lead the inning off. Yes, Clete Thomas is still punching that International League clock. I can't harsh on him too much, because look at my rubbish life: I have to wash my clothes at a laundromat.

Thomas on second base, Ronny Cedeno steps in. Cedeno is not 34, but 31. I looked it up! He seemed a lot older to me. Why don't these people ever die? Anyway, Cedeno hit a line drive single to center, scoring Thomas. Cedeno made it to second on an error by "first baseman" Ryan Lavarnway. Oh, Ryan. No one loves you any more. Not even your wife.

Ranaudo got a couple of outs, but then walked former Bull Reid Brignac. Reid Brignac! Are we certain this game wasn't played in 2006? Who was that blondie Durham Bulls catcher with the monster forehead?

Popular catcher Cameron Rupp then homered so there're your other three runs for the IronPigs.

Okay. The Red Sox scored eight runs in the fifth inning so settle in with a cup of yerba mate. Catcher Christian Vazquez led off with a double off Enright. Corey Brown walked, Mike McCoy doubled. Vazquez and Brown scampered home. Brock Holt singled, exit Enright. Enter thick-ass vessel Kyle Simon, some righty from Long Beach who majored in Drunkitude at University of Arizona. Simon faced Alex Hassan which so unrattled him that he threw a wild pitch that scored McCoy and then walked AH.

Simon went on to walk the next two batters, scoring Brock Holt. He struck out Butler, but Garin Cecchini got to him for a two-run double. Vazquez bubbled up again and singled in the eighth run. Kyle Simon was extracted from this salmagundi in favor of Cesar Jimenez, who got the last couple of outs as if proving a point.

Bryce Brentz hit an RBI single in the sixth inning for the ninth run. I'm applauding politely, but on the inside so I don't give myself away.

Rich Hill and Alex Wilson pitched the bottom three. Rich Hill makes me so sad that I worry about my ability to be impartial. What if he has a bad outing? I'm sure he theoretically would want me to call him a bum... I just don't think I can. I really don't know life at all.

clouds:
1. Rain cut this game short. That's too bad, because I'm certain that Jim Murphy was going to break it wide open.

2. "In the last two years, I haven't been very successful (in the majors)," Enright said on Monday's media day. "The Angels had me go through a few mechanical changes last year that I kind of struggled with. I feel much better going into this year." - Greg Joyce

3. Brock Holt is boiling hot, like the sea. 3-3 in this game plus all his activity opening day. Christian Vazquez went 3-4. Garin Cecchini seems to be enjoying the Rhode Island weather as well.

4. Here's a picture of Enright playing golf. I know, a baseball player golfing in his spare time, what a shock. Next thing you'll tell me is that he likes country music and has a wife that would normally be way out of his league.

I will conclude by insisting you get more information from my homies at the Noise Nation IronPigs blog. Those guys are true blue baseball fans who care immensely for their team... And the team loves them back. It's beautiful.