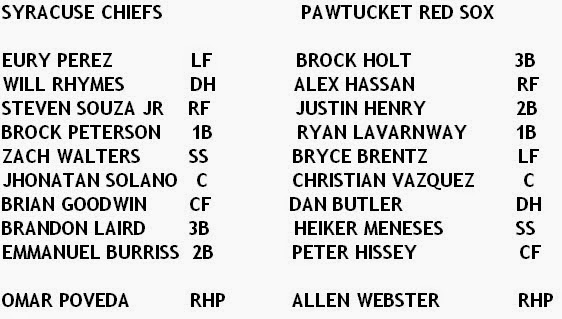 Pawtucket takes the second game of the series, 7-1. I told you Webster was loaded for bear. And yes, he gets the win, but you cannot discount Justin Henry's work. Henry gets half the W. So a "V".

Webster pitched six shutout innings, gave up three hits (two were doubles) and walked two batters, throwing 83 pitches in the process. 54 were strikes. He got a lot of ground ball outs. That's all I can give you, I wasn't there.

Righty Omar Poveda started for the Syracuse Chiefs. I thought Poveda was a fatass but he looks to be in reasonable condition. Poveda had a tough start, pitching four innings and giving up seven runs. Poveda came in for the fifth inning and faced three batters but could not get an out. His relievers kept Pawtucket scoreless the remainder of the game, so I'd say Poveda gets the loss, don't you?

Pawtucket's assault commenced in the first inning. Poveda walked the first two batters and Justin Henry doubled, driving in a run and putting Pawtucket up 1-0. Poveda got Lavarnway out, but then Bryce Brentz hit a two-run double. Excellent. 3-0 Red Sox.

Pawtucket sprinkled some players onto the bases in the second, but could not generate a run. In the fourth inning, DH Dan Butler doubled and scored to bump Pawtucket up 4-0.

The fifth inning was perhaps the most exciting for the fans at McCoy Stadium. Alex Hassan led off with a double and then Henry and Lavarnway hit back-to-back home runs. I can't convey with words how electrifying that must have been, so let me use a picture:

Well, what the hell? Wasn't Syracuse supposed to have scored one run? Yes, it was off Drake Britton in the ninth. Britton walked in a run. It was kind of a sloppy inning, maybe you should go read about it somewhere. But not at PawSox Blog, because I think it died. Awww, Keith! What happened? And if I were you, I would avoid Paw. Red Sox News - It's just generating links for profit. No class.

2. No Garin Cecchini, no Corey Brown, no Mike McCoy. Brown and McCoy might be recuperating.

3. “My fastball command was 10 times better than where it was the last game. I was throwing my off-speed for strikes and they were getting bad contact,” said Webster after Pawtucket registered its fourth win in its last five tries. “I was staying more in line and driving the ball to the spot rather than jerking it.” - story

4. The Chiefs' Will Rhymes was ejected in the ninth. he got called out looking in the eighth, so you figure it out.

5. "The only man who can keep Garin Cecchini off the bases is Kevin Boles." - Good one.

6. Terrible headline: "BOSTON'S WEBSTER GROUNDS UP SYRACUSE".
Day game today! Anthony Ranaudo will face Syracuse's TBD. I must get ready!
Posted by Jenks at 11:05 AM