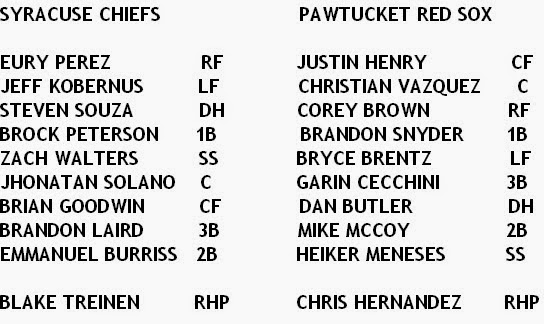 Pawtucket wins a needlessly long game, 3-2 in ten innings. And it took three hours and 45 minutes! And the first six innings were on the books after two hours, which means it took an hour and 45 minutes for three innings. And that's why I left after eight, even though Jim Martin was doing the PA. Like old times.

Chris Resop pitched the ninth inning and got the win, but the starting pitcher was lefty Chris Hernandez. Except Craig Breslow pitched the first inning for rehab purposes. He threw 10 pitches, six for strikes, if you're concerned about Breslow's development.

Hernandez pitched 4 2/3 innings. The Chiefs got seven hits off him, but Hernandez' defense was tight so the hits only translated into one run. BRYCE.

Starter for Syracuse was Blake Treinen, big, sexy young talent. I'm pretty sure he has a girlfriend/is married, before you ask. I know, what's hotter than someone's triple-A debut? Treinen was terrific. He pitched five innings and gave up two unearned runs.

Treinen's defense failed him in the fourth inning. Catcher Christian Vazquez led that inning off by reaching on an error by second baseman Emmanuel Burriss. Corey Brown followed with a double, then Brandon Snyder singled. Vazquez scored. Bryce Brentz followed by grounding into a double play, WHICH IS COMPLETELY FINE, HAPPENS TO THE BEST OF US, HA HA HA. However, Garin Cecchini delivered an RBI single to bring the score to 2-0.

Things were fairly quiet until the sixth inning, when the PawSox started bumbling around. With one out, DH Steven Souza reached on an error by RF Corey Brown. Hernandez got the second out, but then SS Zach Walters reached on an error by Heiker Meneses so Hernandez inherited all this slop on the bases. Catcher Jhonatan Solano hit an RBI single to score Souza. And then Brian Goodwin singled. Hernandez out, Alex Wilson in. Wilson looked fresh as a daisy and got the last out. He maybe lost weight? 2-1 PawSox.

Skipping to the top of the eighth. Rich Hill was pitching. First baseman Brock Peterson led off, hit a ball to shallow right. Mike McCoy went back to grab it, Corey Brown came in, and they tripped all over each other and they both went DOWN! Neither fielder was able to get up for a few minutes and it looked like Brown got the worst of it. How quiet was the ballpark! How solemn! All the personnel came out, but eventually the lads shook themselves off and rejoined their team.

After all of that and after two outs, Solano and Goodwin got on base and Hill was replaced with Brayan Villarreal. A couple of wild pitches later, the Chiefs tied the game. The pitching and everything else had started to fray in the sixth inning anyway.

Extra innings! Chris Resop got three outs in the tenth somehow. Righty Daniel Stange, who says crap like "hey man I hit a bullseye, don't need those they are for girls.." came out for his second inning of relief. All you need to know is that Justin Henry scored on a wild pitch. Sorry, when relievers pitch an inning and change and need upward of 30 pitches to do it, that's rubbish baseball. Even for the minors.

two things:
1. Garin Cecchini - one hit, one RBI. So hot right now. You might say he's been "swining" a hot bat. Also his teeth are ridiculous. Lavarnway did not play.

2. Manny Delcarmen pitched an inning for the Chiefs. I wonder if he had time to catch up with everyone? Like, wasn't he on the team with Breslow in '06?

3. "He started working out at his high school in Ossage City, hitting the weight room hard and tirelessly working on his technique. He chiseled his physique into stone, and built a stock of hard, lean muscle in his shoulders and trunk while also improving his flexibility and endurance. His velocity began to climb and his pitches started to jump out of his hand with the added arm strength and improved flexibility and balance." Wow! Hot stuff, coming through! Ryan Kelley also includes scouting video, interferes with my font.

4. I wrote a bunch of stuff about Scott Cousins, only for him to get released a few days ago. Every. Season. JC Linares also got the boot. Too bad, I liked him.

5. I don't even know what to say about this. I may have to do a separate post about it.

6. " Hernandez gets so many balls in play I wonder what his stats were with and without Iggy the past three years or so." - Interesting comment, JackieWilsonsaid.


DOESN'T ANYBODY WANT TO TALK ABOUT CHRIS HERNANDEZ?!

By the way, when I went to opening day there was a guy dressed like a red rooster dancing around the parking lot. He was at the game last night, still dancing. He sat behind me at one point and I was surprised to see that it was a grown man in pantyhose. He smelled incredible, too. Anyway, I think he's making people a little uncomfortable because McCoy Stadium is not really that kind of ballpark. Not me, though. I find him intriguing and I wish to subscribe to his newsletter.

TONIGHT! Back to the top of the rotation with Allen Webster, who's super pissed off and raring to go. Thick-ass righty Omar Poveda will oppose.
Posted by Jenks at 11:32 AM