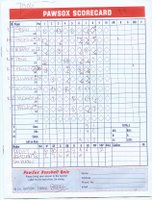 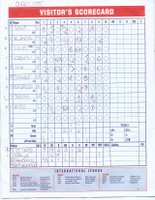 I realize that this game was a few days ago. It's very hot in here on the third floor and I'd really just like to leave but I haven't done a game summary in quite a while.

I bleed for you.

David Pauley started this game. He was somewhat red-faced and ineffective. He lobbed the ball to 30 batters in six and gave up nine hits and two walks. Oh, yeah, he hit two batters and gave up 4 runs. Exceptional performance. Definitely major league caliber.

A mysterious sox-up fellow came in to relieve Pauley. His number, 33, was not on the roster and I at first thought it could be Hertzler. (Abe Alvarez has changed his number a couple of times.) But it wasn't! It was Phil Siebel, who I forgot existed! Wow, what a treat! Phil S. was sincerely effective and crisp, a nice change from Mr. Messy. Two innings, 4 K's, no walks and no runs.

Jermaine "Man" Van Buren immediately gave up a lead-off single in the ninth. I hate JVB in late innings. But he got the last three outs after that and everyone was happy. Van Buren is uncomfortable for me to watch and he is probably going to die soon.

Lefty Valerio de los Santos started for Charlotte, a bad-ass IL team. He held Pawtucket to one measly run and two cheap hits through five. Andrew Lorraine pitched the sixth and hit Wily Mo on the tarsal rotator quad-cuff lat. Then came Dustin Hermanson...you remember him. He no longer looks like a member of Rascal Flatts but he pitches much like a washboard player. Hermanson cordially invited members of the Pawtucket Red Sox to load the bases around him. Then came Jeff Farnsworth who allowed 4 more runs. Yes.

Offensively: Once again, I don't know anything. The score was 4-1 after 6 and I had written the PawSox off.Then Handsome Jeff Bailey swooped in and did some dramatic RBI stuff. And Pedroia? My gal is red hot. DP busted .300 recently. And with the infielding!

Luke Allen report: Luke did not play. I thought he might come in and PH for Yuck-aby but no. At this point, I feel kind of bad for Ken Huckaby. All his homies were getting on base and he is just hopeless at the plate. RJ is probably yelling, "Yeah, Huck! Git you some!" and Ken is dying inside.

Back to Luke Allen: sometimes when people ask for his autograph, Luke will ask if his son can sign one. Is that cute? I think it is.

Two things:
1. There are two players on the Charlotte Knights named Josh Fields. Fortunately, one is a pitcher, else I don't know what.
2. The manager of the Knights is named Razor Shines. Come on!
3. There was an unmistakable smell coming from the visitors' dugout/clubhouse area. I'm just saying. I was sitting right there.
4. The Hess Express / Change-Up stand at first base sells Willow Tree brand Chicken Salad. It is true what they say about Willow Tree: it spoils you off of any other chicken salad. It is the Cadillac of chicken salad. Can I please get a what what on Willow Tree? They also have vegetarian stuff.
5. I'll probably be at the park tonight. Then karaoke!
Posted by Jenks at 2:08 PM