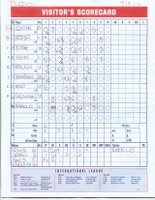 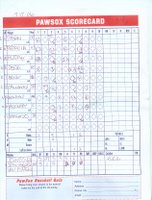 Winning, like money, is one hell of a cosmetic.

Jason Johnson, who everybody hates, started for Pawtucket. The first batter he faced was Tike Redman. Tike Redman hit a double and things didn't get too much better after that. Johnson gave up 9 hits and 6 runs through five. The fifth inning was definitely the most awesome, because JJ gave up four runs... one of them walked in.

Sixth inning, here comes Marc Deschenes. Deschenes pitches not one, not two, but three innings and looks great doing it (4 K's). He should have started this game. At least he got the win.I'm circulating a petition to get him back as a starter. Check out my website, letsgetmarcdeschenesbackintothestartingrotation.org.

RJ must really hate me. Jermaine "Jermanie" Van Buren pitched the ninth. But it's okay. Nothing happened. JVB led the IL in saves last year. I know.

Colby Lewis started for Toledo. He had a few problems of his own... Kenny Huckaby managed a double off him. One more thing Huck cannot do: run. He is dreadful. Lewis pitched 6 innings, giving up the bulk of the runs in the third.

Jeff Bailey had another big game, going two for four with a double and a pair of RBI's. David Murphy homered in the first and hit a double off his first pitch in the third. David Murphy has been great in Pawtucket.

Two things:
1. A lot of the Pawtucket batters have been heating up. Pedroia and Machado most notably.
2. Wily Mo Pena was very, very nice in Pawtucket and signed a million autographs. He didn't do much on the field, however.
3. Dmitri Young played first base for the Mud Hens! Young went 3-5.
4. Dustan Mohr played center for Toledo. Good thing he got the hell out of Boston!
Posted by Jenks at 11:18 AM