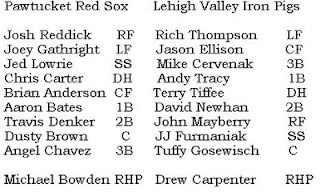 The Phillies triple-A team WINS! 4-1 and it is probably Javier Lopez' fault.

What we have here is Drew Carpenter again. Is this the third time he's pitched v Pawtucket in 2009? Not fair. Of course, it feels like Pawtucket's played the Iron Pigs 88 times this summer. Wouldn't you rather see more Durham Bulls or Mud Hens or Bats?

Carpenter is a strong man and he pitched seven innings and threw sapphire bullets of pure love. One run on six hits for Carpenter. Carp, maybe they call him.

Pawtucket scored its only run in the fourth inning. Carter led it off with a single, but was shot down at second when Anderson grounded into a force. Then Denker singled and Brown singled and Anderson scampered home.

Michael Bowden started for Pawtucket. B. pitched five innings and didn't walk anyone. I think that is great! Bowden's one surrendered run came in the fifth, when he allowed two leadoff singles and a couple of small-ball sacrifices to score the run and tie the game.

TJ Large and Javier Lopez paired up to be criminal relievers. Large allowed Lehigh Valley to pull ahead in the sixth inning. Former Orioles hottie David Newhan walked with two outs and John Mayberry Jr doubled him in. 2-1 Iron Pigs!

Large continued to be shaky in the seventh inning, when he decided to load the bases instead of getting outs. Lopez came in after Cervenak lined out to right. And big, hairy Andy Tracy immediately hit a two-run single and all hope was lost.

So TJ Large took the loss for Pawtucket.

now you see why evil will always prevail:
1. David Newhan again! Newhan's got a pretty extensive Wikipedia entry, which you should read. Baby.
2. Pawtucket could not muster more than a few scattered singles. Angel Chavez' tiny, adorable hitting streak ended.
3. I guess I don't get to see Gathright play at McCoy Stadium. Why is my life so hard?

Tonight! I was going to go to the park, but then it would just be me and the leafblower people. More Pigs. Goodbye.
Posted by Jenks at 7:45 AM