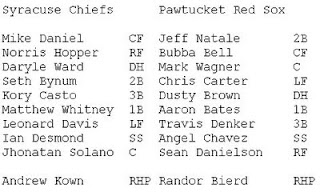 8-2 Pawtucket! Some poor kid named Andrew Kown got tattooed by the Pawtucket Red Sox. He is never going to live it down.

Randor Bierd would be yer Red Sox starter. Bierd got the win. He pitched five reasonably good innings. He even faced a couple of batters in the sixth, but did not record an out.

And that's when Javier Lopez came in. Lopez is a stranger in an open car. Lopez pitched three damn innings, which is awesome for a former LOOGY. Oh, and he set the Chiefs down in order. Nine outs. Very nice. Today is the day, modefoque!

Fellow WBC pitcher Fernando Cabrera made it interesting in the ninth when he gave up hits to Davis and Desmond, but he breathed and focused and figured it all out and went K, pop out to third, K.

Pawtucket offense: Almost all the good stuff happened in the third inning. Denker, Chavez, and Danielson all singled. This chippy shit resulted in a run. Then Jeff Natale walked to load the bases. Bubba Bell grounds out and gets Chavez home. Mark Wagner does the same damn thing, except he drives in Danielson. "Drives in" might be giving Wagner a little too much credit for a productive ground out, but I am feeling expansive.

Chris Carter followed the grounding out nonsense with a two-run bomb. I'm sure he had a boner as he circled the bases. 5-2 Pawtucket and Chiefs starter Andrew Kown is probably starting to realize that this isn't his night.

Did anything happen between Chris Chriscarterson's homer and the eighth inning? Not much. But in the eighth, first basethug Aaron Bates led things off with a single. Then with one out, Angel Chavez doubles! Runners on second and third and... you are going to die... reliever Zechry Zinicola intentionally walks Sean Danielson! I'll bet the little guy got all puffed up with pride.

What happened next? Jeff Natale hit a three-run double. Wow, mom, wow. 8-2 PawSox and that's how the game ended.

and i won't go away until you tell me so:
1. Dusty Brown went 3-4. Jeff Natale had those three RBIs. Mark Wagner went 0-5 with two strikeouts.
2. Angel Chavez was big once again! Not only that, but he kicked ass defensively at short. Chavez is like a Law Enforcement Cheetah.
3. Post-game, final game, whatever. Squishy balls a go-go. I caught one off washed up lefty Hunter Jones. It could become my most prized possession.
4. Lopez only threw 23 pitches in his three innings of work. I am under the impression that he is on his way to Boston, but it could be just a rumor. ALL I KNOW is that misc staff members were shaking the guy's hand in a "great working with you" kinda fashion.
5. Chiefs DH Daryle Ward had a big night, going 3-4 with a HR.