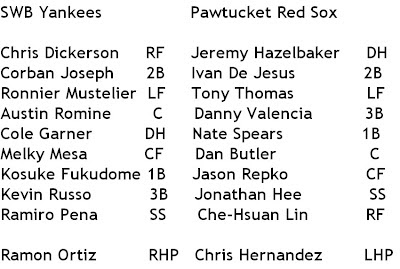 No playoffs yet, guys. Yankees win 4-3 and it is primarily Pedro Beato's fault. Starter Ramon Ortiz gets the win, Chris Hernandez the loss.

Hernandez pitched six innings and gave up three runs on seven hits, including two home runs by CF Melky Mesa. Damn you, Mesa! Hernandez came in for the seventh inning, which sounds like they were pushing it but his sixth inning was pretty breezy. But a double, a home run, and a single right off the bat is a sign that you're all done.

Ortiz pitched seven innings, gave up three runs on seven hits. One of them was a home run courtesy of Danny Valencia that went right over my head in the outfield, over everything, bounced off a car and rolled through the parking lot and into the night and then went to the alley to hang out in garbage cans with some stray cats.

Jason Repko tripled in the bottom of the seventh to give Pawtucket their third run. I'm skipping over a lot because I am really short on time... Sorry I haven't been around. I need a new job. One that won't make me sick.

2. LF Ronnier Mustleier went 4-4, which is pretty good for a fatass.

3. I was at this game for a little while. It was well-attended. I’ve been involved in a number of cults both as a leader and a follower. You have more fun as a follower but you make more money as a leader.

Okay, I'm going to the park for some Arnie. TTYL.