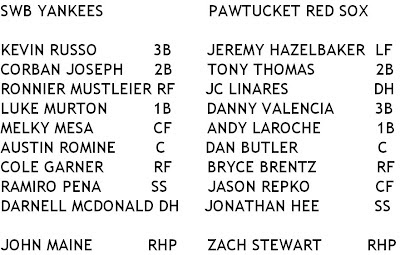 Yes, it's true. Pawtucket beat the Yankees last night by coming from behind. 7-4 with home runs. Zach Stewart gets the win. Please go all the way... It feels so right...

Stewart did good, good things in the first inning, started wavering in the second, then appeared to be doomed in the third. He got up to 90 pitches in five innings and gave up four runs on seven hits. Stewart got all effed up in the third, giving up a solo home run to third basedude Kevin Russo and a two-run bomb to Luke Murton. But that was all... The Yankees would score no more.

Starter for SWB was John Maine, formerly of the Mets or something, and formerly of the PawSox for a period of time that does not exist. Maine only made it through four and two third innings, probably quietly alarmed at his pitch count going up to 104. Yes, John Maine, that's a real pickle.

The Yankees were up 4-0 at the top of the third and things weren't looking good for the Pawtuckets. But at the bottom of the third, Tony Thomas singled with one out. Doubled, sorry, he doubled. JC Linares stepped in after that and hit a home run. And then Andy LaRoche hit a home run! And so it was only 4-3, which is not at all insurmountable.

Andy LaRoche would go on to further badassery in the fifth inning, when he hit a two-run double. Uh, thanks? I should send a boo-kay, right? This was Maine's ticket to the showers, and he was replaced by Chase Whitley.

Alex Wilson picked a hell of a time to be a swing-and-miss reliever! Wilson has been so boring all season, but last night he pitched two scoreless innings with no hits or walks and three strikeouts. Where the heck did all that come from? I have never seen Wilson look so crisp. Pedro Beato came in and pitched a little bit, too. It was good relief.

Bottom of the eighth, catcher Dan Butler led off with a single. Next batter was Bryce Brentz, who hit a home run. Like a Jedi knight! No, better than that... Like a templar knight! Merciless, like Kathy Bates with that sledgehammer in that movie!

Reliever Jose De La Torre got the last couple of outs. Good game. No... Great game. How about that, Alex Speier?

two things:
1. I attended this game. I was by myself, which sucked, and the park was largely vacant. But the people who were there seemed to care a great deal! I haven't seen enthusiasm and passion like that in a long time. YAY BASEBALL.

2. And then Larry Lucchino walked by, which was crazy and unexpected and plumb crazy. Mike Gwynn appeared to be showing him around. I guess he comes down once a year, although this is the first time I have seen him.

TONIGHT! Chris Hernandez! Not sure who's pitching for the Yankees, probably someone ugly. I have to go like right now, so bye.