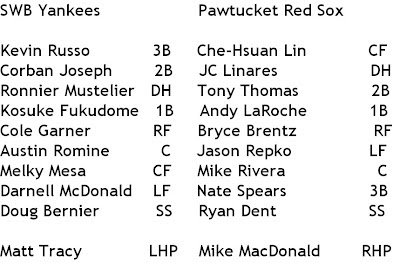 Yankees win 6-2. Come on, Pawtucket, why'd you go out like that? I had a very bad day yesterday.

Starter for Pawtucket was Mike MacDonald, freshly called up from Double-A Portland. MacDonald gave up two runs on seven hits through four innings, including a hone run by Kosuke Fukudome. Okay, something good, something good... MacDonald got six K's. But even though he didn't pitch that badly, he still got the loss. Alex Wilson, I hope you're proud of yourself.

Lefty Matt Tracy started for the Yankees. He pitched five innings and gave up a run. His first reliever was Manny Delcarmen, which bums me out for some reason. I miss the Delcarmen Era in Pawtucket, is all. Adam Hyzdu... Petagine... Abe Alvarez... How long have I been doing this? Please kill me.

First inning, Yankees up and they hit three consecutive singles before an out was recorded. So that set things up nicely for Fukudome, who hit a sac fly. Which was cute and everything and scored a run, but was that really the best he could do against the Freshie? 1-0 SWB.

Bottom of the second, Tracy walked Andy LaRoche and Bryce Brentz. L&B moved up a base on a wild pitch, and then catcher Mike Rivera reached on a fielder's choice that scored LaRoche. Which is French for 'The Rock'.

So my BFF Tony Pena came in to pitch the fifth inning and he immediately hit Mustelier and Fukudome with pitches. JESUS CHRIST TONY PENA WILL YOU GO AWAY ALREADY?! I mean, they get rid of Prior but they keep this guy?! I don't know, maybe he's a swell guy who brings in a box of donuts every morning and helps people fill out their forms. Anyway, at some point smugly handsome catcher Austin Romine hit a sac fly and it was 3-1.

I forgot to tell you that Fukudome hit a solo home run in the third. In a way, Mustelier and Fukudome deserved the HBP.

Sixth inning, Delcarmen was shaky, nabbed the first two outs with little fuss but then walked Repko and then Nate Spears wound up hitting a line drive RBI single to center. So then it was 3-2 and that's not so bad, is it?

Yeah, not so fast. Wilson pitched the eighth and gave up three runs. Pitcher of the Year.

two things:
1. I guess Jason Repko made the defensive play of the year in the first inning, when Fukudome hit the ball deep, like grand slam territory, but Repko went balls-out and nabbed it and tumbled into the bullpen. Do you not see how I make the box score come alive?

2. Another less-interesting website describes it thusly: "They could have had more when Kosuke Fukudome lifted a potential grand slam only to hhave the ball caught by Pawtucket left fielder Jason Repko has he flipped over the four-foot fence." (sic)
3. The PawSox were 1-11 with runners in scoring position and left 10 runners on base. This whole losing to the Yankees thing is worrisome, because that's who they have to beat to advance in the playoffs. I think Boston should send down reinforcements, instead of taking De Jesus...

Well, that's all I have. Nate Spears was ejected, but I can't discern the reason because sportswriters get lazy on Sunday games. Nate Spears is one of those guys that I will miss terribly when he's gone.

This afternoon it's the final game of the regular season. Steven Wright will hopefully dismantle the Yankees offense. Some guy O'Connor will oppose. Are we done yet?