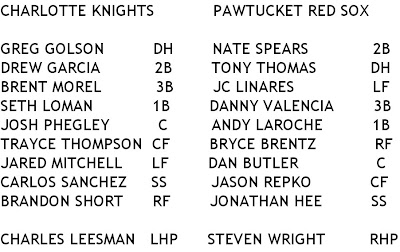 Pawtucket wins 7-2, but in kind of a bummer way because the Knights starter was injured and had to leave the game in the first inning. I mean, I'll take it, but it seems unfair.

Starter for Pawtucket was Steven Wright, who's been decent. Wright's first inning didn't look too cute, what with a few singles and a walk, and Dan Butler looking awkward, but everything smoothed out and Wright went on to pitch seven innings. Wright threw 107 pitches, but don't freak out. He's a knuckleballer. Charlotte got six hits off Wright, leading to two runs: One in the first, one in the fourth.

Charlie Leesman started for Charlotte. Top of the first, Leesman gave up back-to-back singles to Nate Spears and Tony Thomas. JC Linares hit a ground ball infieldish, first base-ward, and as pitcher and infielder converged... Leesman put the brakes on to avoid a smash-up and effed his knee up good. Leesman down, in visible agony. After a few minutes, Leesman was assisted off the field. We all felt bad about the whole thing.

Bottom of the third, Danny Valencia hit a two-run homer. Danny. He certainly is a handsome devil. PawSox up 2-1. Charlotte tied it in the top of the fourth, but post-season BEASTMASTER Bryce Brentz led off the bottom of the fourth with a damn triple! Brentz scored when Jason Repko reached on a fielder's choice, putting the Red Sox up 3-2.

Seventh inning, lots of bang. Ryan Kussmaul was the new reliever for Charlotte. Nate Spears singled with one out, then Tony Thomas went deep to left, into the bullpen, where the relievers do their weird home run grandma dance. Even cooler, JC Linares hit a home run immediately after that, also into the Pawtucket bullpen. Good Valentine's.

Alex Wilson once again provided stellar post-season relief in the eighth inning, and Josh Fields slayed the ninth with his heater. Ryan Dent stepped into the ninth inning for some reason. And that was it!

una vaina asi:
1. Spears, Thomas, Linares and Brentz all got two hits. Jason Repko got zero hits and was caught stealing. Is everything okay at home, Repko?

2. "Charlotte ace Charlie Leesman was trying to field a ground ball along the first-base line with no outs in the first inning when he leaped to avoid a collision with his first baseman, came down awkwardly and then did a backward somersault across the chalk line. He needed help leaving the field and was limping severely after the game." - MacPHERSON!

3. "I felt good, and I was mainly trying to just stay back," said Wright, who was only acquired from the Cleveland system on July 31, in the trade for PawSox first baseman Lars Anderson. "In the first inning I tend to start rushing my pitches. I need to stay back and keep the ball in the zone. You can look at the layoff, but almost every single start, I struggle in the first inning. Once I figure out what I'm doing, I'm okay." - Jay Miller

TONIGHT! Zach Stewart and probably Charlie Shirek. So much Charlie. Just don't drag him through the cold cuts!