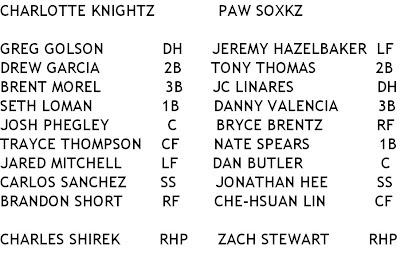 Dan Butler does stuff sometimes. Pawtucket wins 2-0 with no Gomez, no Ciriaco, no Middlebrooks or Lavarnway.

Pawtucket starter Zach Stewart pitched six scoreless innings, gave up four hits. And a walk. And he struck out four. And he danced. Like a wave on the ocean romance.

Charles Shirek was Head Righty in Charge for the Charlotte Knights. Shirek pitched seven innings, gave up both Pawtucket runs.

Dan Butler hit a solo home run in the second inning to score the Red Sox' first run. Butler also singled with one out in the fifth, allowing Che-Hsuan Lin to get him over with a double. I am officially Interested In Dan Butler, so we'll talk about him at some point.

Wait, that sounds like I want to ask him out... That's not the case. I would just like to engage in a water balloon fight with Dan Butler, is all. Fuck, yeah.

Relievers Pedro Beato, Alex Wilson, and Jose De La Torre were parfait, and to them we possibly owe this win. Zach Stewart gets it, though, so he's a lad o' pairts.

two things:
1. "That the PawSox have made it this far is somewhat surprising, given the turnover their roster has had." - Yeah, dude, not for nothing. (Mullen)

2. Please enjoy sexy beefcake shots of Dan Butler. Oh, look, here's more. This one is not a picture by someone with blazing pants, but it serves a purpose.

3. Danny Valencia also hit a double. Hee made an error.

4. "When Carlos Sanchez lofted a bloop to short center, it looked like it was going to fall in, but after breaking back, Lin reversed himself and came sprinting in to make a basket catch at the last moment. Lin looked up to see Mitchell on second base, and so tried to throw, while still running. Lin's throw was accurate, but it hit the ground about halfway to the infield, and took about 57 bounces before first baseman Nate Spears could scoop it up for the doubleplay, just before Mitchell got back to first." - Jay Miller, whose PawSox coverage is excellent.

5. "In a classy salute to the paying customers that took place afterwards, the PawSox players and coaches came out of the dugout and doffed their caps to show their appreciation of the fans’ support." - McGair. I would also like to add that Brendan McGair's opening lines almost always crack me up.

6. "PawSox manager Arnie Beyeler likes to point out that each playoff game has been the equivalent of a box of chocolates – you just never know who’s going to play the role of hero on a given night." - Exactly what I am talking about. (ibid.)

7. "Beyeler mentioned that he’s received well wishes via text from several ex-PawSox players, the list including Ryan Lavarnway, Jose Iglesias and Mauro Gomez. “I heard they were watching our game (last Saturday night in Rochester) during the rain delay (in Boston),” said Beyeler. “It’s nice that they care enough to pay attention.” - McGair killing it this wk.

8. I'd like to serve HIS purpose, if you know what I mean!

RIGHT NOW! Nelson Figueroa v Scott Carroll. Sorry, I slept all damn day. It was my turn. A win could become a win, and then Omaha or Reno. Heard the PCL is hitterish, but who knows?