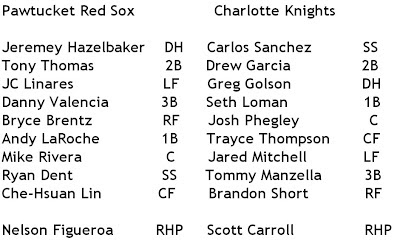 I wish I could have been there, I think. 4-1 Pawtucket, Nelson Figueroa goes six good, good innings. The PawSox win the Governor's Cup and I am so detached from it all. Me, of all people, missed it. Bummer, right?

Figueroa only gave up one run, but seven hits and Charlotte just could not deliver. I really thought the Knights were going to run roughshod over Pawtucket back home, I really did. I must tell you I like a little bit more of a fight in playoff situations. A sweep is boring. I like spit and dirt and nails. I also like Manny Machado.

Figueroa struck out fiveand didn't walk anybody. And I don't know much about center fielder Trayce Thompson but he made the last out twice with runners waiting to score.

Scott Carroll started for Charlotte, pitched 6 1/3 innings. Seventh inning, Pawtucket started crawling up his ass and he was up to 97 pitches so it was time to grab his hat and overcoat and head home. Reliever Santos Rodriguez and Brandon Kloess kept the Red Sox scoreless, but it was too late.

Here's how the scoring went down. Second inning, Danny Valencia led off with a single. Then Andy LaRoche doubled. I don't really care for either one of those guys, but okay. Thanks, Elvis. Catcher Mike Rivera, who I do like, hit a softy to left and Valencia scored. Then Che-Hsuan Lin hit a sac fly to score LaRoche. 2-0.

The Knights scored a run in the fifth inning. Carlos Sanchez hit and RBI single, which he attempted to extend into two bases, but was caught in a pickle and was eventually tagged out by Ryan Dent.

In the seventh inning, Lin reached on an error by Sanchez (I see a scapegoat emerging) and then scored when Jeremy Hazelbaker tripled. Hazelbaker's pants are insanely hiked up. He looks like John Olerud without the helmet sometimes. He's built like a wooden clothespin. But FUCK YEAH TRIPLE.

Hazelbaker later scored on a line drive single by JC Linares. Will Inman, Jose De La Torre, and Josh Fields pitched an inning apiece, putting away the Knights with little muss. And not a hit between them. Come on, Charlotte. Come on.

i know someday i'll be the only one:
1. Bryce Brentz did not get a hit, instead electing to strike out four times. WHERE'S YOUR MESSIAH NOW?

2. "The Pawtucket Red Sox haven't won the International League title since 1984, but thanks to Thursday night's victory over Charlotte, the Triple-A affiliate of the Boston Red Sox swept their way to one. Nelson Figueroa was the winning pitcher in the effort, which Pawtucket took 4-1, powered by hits from six different batters, as well as RBI from four." - Marc Normandin is a great guy, wicked smart.

3. "The Pawtucket Red Sox will travel to Durham, NC to await the champion of the PCL to take them on in AAA's Super Bowl on Tuesday night." - Thanks, Ted's Army. I'm going to ride my bicycle down there immediately.

Yeah. I'm glad everyone's so psyched about this, especially since Boston's in the sewer. I'm going to withhold further comment, because I don't want to get too whiny.

Just know that I've been doing this for a long time.