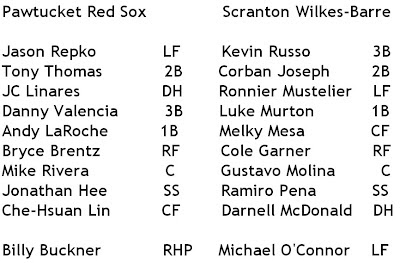 Pawtucket gets socked on the jaw in the ninth and loses 4-3. Oh, damn, that was so close.

Billy Buckner started for the PawSox, pitched six 1/3 scoreless innings. He racked up seven strikeouts and left the game with a 2-0 lead, whistling and swinging his lunch pail the whole way home.

Starting lefty for the Scranton Yankees was Michael O'Connor, who we have seen before. Like, last week. O'Connor pitched six innings and gave up two home runs: A solo home run by Bryce Brentz and a solo home run by Mike Rivera, both coming in the second inning. Why thank you, Bryce, for being such a nice boy.

So after Second Inning Homer Time, no one scored for like, ever. Then, in the eighth inning, Jason Repko singled to right off reliever Manny Delcarmen. Oh, Manny. How I loved you. Repko dashed over to second on a throwing error by RF Cole Garner. Thus unsettled, Delcarmen threw a wild pitch to Tony Thomas, getting Repko to third. Tony Thomas induced the wild pitch WITH HIS MIND, YOU GUYS. Thomas got caught looking, sadly, but Ryota Igarashi took the wheel from Delcarmen to face JC Linares. Linares tripled! YEAH! Repko scores, Jesus saves, Smokey sings!

Brace yourself for the bad stuff. Brock Huntzinger was pitching the bottom of the eighth and Gustavo Molina hit a bomb to left. 3-1. Manageable, right? So who comes in to pitch the ninth? Mark Melancon? Travis Hughes? Fernando Cabrera? Michael Bowden, even? No, Tony Pena Jr. Thanks for this. Pena gave up an RBI single to Ronnier Mustelier and it was 3-2 and Pena was extricated from this development. Pedro Beato was entrusted with two outs. He got one, but... But... Yeah, Melky Mesa hit a two-run homer to walk off with the win for the Scrankees. I am really starting to hate Melky Mesa and his PawSox-killing ways. I am not angry with Pedro Beato, but I hope Pena repeatedly steps on a rake and gets it in the mush.

how could i ever have lost you when i love you:
1. Did you know that Chris Smith got 15 saves for the PawSox in 2008? I did not. I don't remember that guy being a closer at any point, but yeah, he led the team in saves. No one cares about this but me.

2. In case you felt like throwing up: "At 10:27, Frank Sinatra’s “New York, New York” began playing over the loudspeaker at the Yankees rushed to home plate to smother their hero of the night with love." - Jim Mandelaro

Geez, I guess that's it. Do you know who Vidal Nuno? No, he's not a guitar player. He's starting for SWB tonight v Pawtucket. But it's okay, we have Nelson Figueroa, who I hope can set down all the baby Yankees like Murton and Mesa. Don't make me sad, Nelson.