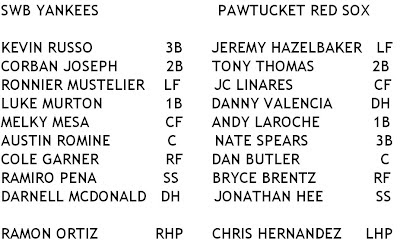 Incredibly, Pawtucket won this game 3-2. Win goes to Scott Atchison, veteran reliever and opener of pickle jars. Ramon Ortiz was the losing pitcher, which was really too bad because only one of his three runs was earned.

Lefty Chris Hernandez started for Pawtucket and I almost immediately began to worry, as he didn't look terribly sharp. But he got the outs he needed! Hernandez' six innings included four hits, two walks, a wild pitch, and a balk. He struck out six and both runs were charged to him. On his Earned Run Credit Card, with an annual APR of 12.9%. The Yankees got both their runs in the second inning, using a couple of hits and a walk and a balk and a groundout to get that shit across.

Ramon Ortiz effectively stymied the PawSox up until the fifth. I saw a million infield pop-ups during his appearance, and you would be surprised at how enraging they are. GAH THE FREAKING SECOND BASEMAN HAS IT!!! At last, catcher Dan Butler reached second base on an error in the fifth inning and Bryce Brentz doubled him in.

But the Red Sox were still down a run, and no one was really hitting anything. At last, in the seventh inning, third baseman Nate Spears led off with a double. Bryce Brentz, suddenly a key hitter, singled, scoring Spears. TIE GAME! But even better, shortstop Jonathan Hee also singled. Brentz made it to third, but the throw in from right field was off target, and Brentz was able to make it across home plate. Ortiz OUT! Enter Juan Cedeno for one out, and big ol' Preston Claiborne for the last one. Clever voiving, Dave Miley.

Will Inman got a couple of post-Atchison outs, and then Jose De La Torre came in to close things out. And oh, lord, it was not easy. First of all, De La Torre was all sweaty and gross and spazzy. Large first baseman Luke Murton hit a single. Melky Mesa and Kevin Romine really worked the count on De La Torre, but he managed to get them to strike out. The he walked Cole Garner, it was awful. Next batter, Ramiro Pena, hit a ball deep to center... But no, Linares caught it and game over. WHEW!

two things:
1. "And if Pawtucket has bid farewell for the moment to a pair of superb shortstops in Jose Iglesias and Pedro Ciriaco--both of whom have been promoted to Boston--there's no shortage of glove at the shortstop position, as the pride of the University of Hawaii, Jonathan Hee, is doing a terrific job, including starting two critical doubleplays Thursday night that killed Scranton/Wilkes-Barre rallies." - Uh, maybe. I don't think Hee is that great a shortstop. Yeah, he got the DPs, but he's kind of graceless. (Cool story, Jay Miller.)

2. JC Linares also got a couple of hits. And he played center, which must be an act of desperation. Where's Lin? And why does Jeremy Hazelbaker hike his pants up so high?

4. PawSox Blog! "In his last start, which coincidentally was against the Yankees and tonight’s starter Ramon Ortiz, the Florida native pitched the curve ball a total of three times; today he used it six times, with one being the final pitch of his fourth strikeout. “Not going into it,” responded Hernandez when asked if his increased curveball usage was part of the game plan prior to tonight’s affair. “It worked well tonight, and we’re here to win so we (him and Dan Butler) didn’t shy away from it. It felt good and I felt good throwing it, so we kept going with it.”

5. Peter Gobis! "The PawSox knotted the score at 2-2 in the seventh inning on two bizarre bloopers. First Nate Spears lofted a blooper down the left field line that three SWB fielders converged upon, but none could grab, the PawSox third baseman winding up on second base. An out later, Brentz took two wild swings at breaking ball pitches from Yankee RHP Ramon Ortiz, then blooped an RBI-single into short right field." That's a lot of blooping.

6. Over in the other playoffs, the Charlotte Knights are also up two games to none. Uh-oh!

7. Playoffs continue tonight in Rochester, and they have a lot of special things going on.

8. I have to admit, this Paws and Sox graphic from Masshole Sports made me laugh.

9. Last night, I sat amongst some garrulous senior season ticket holders. I was surrounded on every side, so I felt like an unwilling participant in their conversation. What's the best way to the Cape? Who pitched last night? How's your father? They talked about Arnie Beyeler as a potential candidate for promotion, which is applesauce. But if you feel like indulging those thoughts, Kevin Thomas is here for you.