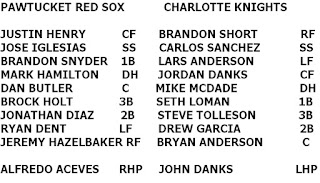 Sorry. That was terrible. Pawtucket's winning streak ends at last, with the Knights of Charlotte winning 6-4. Big 'W' for John Danks.

Alfredo Aceves got the start for Pawtucket. He pitched five innings and gave up five runs. Aceves left the mound having thrown 97 pitches and with his team down 5-3. Boo hoo. DLiPB.

John Danks. Son. Father. Husband. Baseball player. Deep thinker. Lover of animals. Texan. Danks pitched six innings and gave up three runs on seven hits. Only two runs were earned, because OH MY GOD BRANDON SHORT DO WE HAVE TO START CALLING YOU 'CLANK'? Danks struck out five and he makes really good omelets. And he's sooooo handsome and athletic.

Pawtucket was looking pretty fly in the first inning. Justin Henry led off with a single, advanced to second on an error and then third on a sac bunt, thankyouverymuch Gary DiSarcina. And then Brandon Snyder and Mark Hamilton hit back-to-back singles that scored Henry. Dan Butler followed that little flurry up with a ground ball double to left that scored Snyder. And it was 2-0 PawSox for Aceves.

But everything's good 'til it turns bad. Aceves walked the first two batters he faced. And then center fielder Jordan Danks hit a two-run single to tie the game.

Bottom of the fourth, Charlotte scored their third run when first baseman Seth Loman hit a solo home run to right center. Top of the fifth, Justin Henry doubled and then later scored on an error.

Ninth inning, Pawtucket down 6-3. Last clear chance. Ramon Troncoso pitching. Second baseman Jonathan Diaz leads off with a single. Then Ryan Dent singled. YEAH! Okay, here we go! Something's happening! Hazelbaker grounded into a force and got himself to first base, but Dent was out at second. Hazelbaker decided to grab second base, and the catcher, Bryan Anderson, made a throwing error that allowed Diaz to score.

But then Justin Henry and Iglesias grounded out to extinguish that little spark. Troncoso gets the save. It hurts when it don't last.

2. Jim Margalus: "Danks got 11 swings and misses, and if their pitch identification is accurate, it sounded like he was using his curve more often." This and other game miscellany from South Side Sox.

It's gotten more and more difficult to find good links regarding the games. Maybe it's just the regional coverage? The Bisons always had decent stories, blogs. The Knights were second to last in attendance last year, kind of near the bottom so far this year. I should write about their new ballpark.