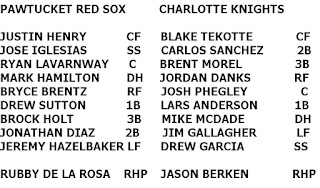 Starter for the Pawtucket Red Sox was Rubby De La Rosa. De La Rosa pitched four innings, gave up one hit. Got seven strikeouts. Chris Hernandez pitched the remaining five innings and it was pretty killer. He only gave up one hit and got the well-deserved win.

Former Norfolk Tides guy Jason Berken started for the Charlotte Knights, who are the White Sox. I told you that because I doubt you remembered. Evidently, one day I was super bored and decided to do some pretty intense research on Berken, which you can read here. Berken pitched six innings and gave up all the runs. Old shoes Donnie Veal and David Purcey finished the game off, my god with those two guys. I always liked Purcey and I thought his career would be more... Memorable. And Donnie Veal! I am shocked to discover that he's only 28. Am I the only one aging anymore?

Pawtucket scored their first run in the fourth inning. Mark Hamilton hit a solo home run. So solid. I like this guy. Fifth inning, Drew Sutton and Brock Holt hit back-to-back singles to get things started. A sac bunt and a sac fly scored Sutton, and then center fielder Justin Henry hit a line drive double to center to score Holty.

Gary DiSarcina is doing some unprecedented minor league shit this season and I loooooove it! He made some defensive changes in the ninth, because he loves baseball with his real, big beating heart. Thank you for caring, Gary D.

So that's the game in a nutshell. Wish I could have been there, but I'll just wait until they get their new ballpark.

two things:
1. Mike McDade is on the Knights now. Just saw him with the Clippers. I have a feeling this won't be his last IL team, which is not a burn because I happen to like him very much.

2. "I've got some hobbies, but really can’t do too much of them out here. I used to work on my truck a lot back at home and that’s something I can’t do around here." - What? Why not? Why can't you work on your truck, Hernandez? I DON'T UNDERSTAND?!

3. Rick Swanson talks about Hernandez and college baseball in general: "If you asked Hernandez, don’t you think he would have rather been the leading pitcher for the 15th ranked team in the country than pitching for a last place team in the Carolina League?" Good point, I'll ask him that next time I see him at the laundromat.

This afternoon! More Charlotte Knights. Alfredo Aceves v John Danks who's going to play with his brother Jordan and this will make Mom so happy. Also they are giving away a washer and dryer at the game today, because it's Mother's Day and mothers love household appliances! I've seen those detergent commercials and I know how happy and proud women are when their laundry is fresh and clean!

And... Recently I scoffed at the idea of Allen Webster being called up. Well, once again I am embarrassed about how dumb I can be. I must try harder.