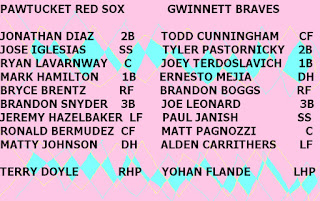 I'm sorry I wasn't around yesterday. I sincerely feel bad. I had every intention... Something happened where I woke up in a lot of pain and so I decided to just rest as much as possible. All better now. Maybe as an apologetic gesture I'll reveal some secret in the comments.

I'm interested in finding out who Matty Johnson is. In fact, I have a few questions about some of these people. Alden Carrithers? Wirfin?! Joey Terdoslavich? Yohan Flande? Okay, I know Flande.

Pawtucket wins, 4-1. Everybody on the Braves got a chance to pitch!

Starter for Pawtucket was Doyle's brother. Doyle pitched six innings, teetered on the edge of 100 tosses, gave up four hits and no runs. He walked two and struck out five. He walks the loneliest mile. He smiles without any style.

Yohan Flande is a lefty pitcher, not a figure skater or a famous French scientist. Flande had a rough go of it, working for five innings and giving up eight hits. He threw 106 pitches, got seven strikeouts, was all sweaty and musky and miserable in the swampy Georgia heat. Pawtucket probably could have scored more than four runs off him, like, I'm looking at you Lavarnway, you hitless freak.

In the fourth inning, Ronald Bermudez hit a ground ball double to left with one out. Okay, can we talk about this? Ronald Bermudez? I've seen better players come and go, but Ronald Bermudez is a slab of granite that glaciers cannot wear down. Okay, I'm done. Bermudez scored after a balk and an error got him across the plate. 2-0.

Fifth inning. Mark Hamilton led off with a double. Bryce Brentz struck out, and then Flande intentionally walked Brandon Snyder for a real WTF moment. But I kind of get what he was going for. Jeremy Hazelbaker batted next and grounded into a force. Runners at the corners until Hazelbaker stole second base. Then Bermudez hit a two-run single. Zany!

Anthony Carter got the save. Yeah, okay Carter. You're hot shit. I guess he spends as much time working on his pitching as he does looking in a mirror. BOOM! Roasted.

2. Don Borman, alright! "First up we got to take care of business down in Georgia tonight and then in Charlotte over the weekend before we come home,” said Wanless." This appears to be the only PawSox post in the history of the RI NPR website. So cute they're getting after it. They should totally let me do it!

3.  Recently I confessed to liking Rick Medeiros' blog quite a bit. Here he writes about Boston Strong night in his own inimitable fashion. Holy hell, Rodney Harrison can get it.

4. Matty Johnson comes from Single-A Salem. All of those reminds me how unqualified I am to write about baseball. I am the Michael Scott of baseball blogging. YET I CANNOT BE STOPPED. I am relentless. Jackhammer. Merciless. Insatiable.

TONIGHT! Well... Today's game is over already. I keep weird hours, what can I say? Steven Wright v the ancient Roman Colon. Heard the Braves got clobbered, but enough about that.

TONIGHT! Blackstone Valley Media Club meeting in Pawtucket. There will be snacks.

This happened in the early- mid-90's.

I had a friend named Shelly who'd moved to Hinesville, GA. I rode down to visit her on a bus, which sucked.

Shelly was living in an Army base with her boyfriend and their roommate, Vito. One night she borrowed Vito's car so we could go to Savannah with some other girl from Wisconsin. Don't remember her name so I'll call her Bev.

We went to Savannah, which was lovely. Enjoyed some night life. Shelly had quite a bit to drink, but still insisted on driving home. I remember the road being dark, long, swampy, mysterious. Like my men.

Shelly was driving sort of recklessly and Bev and I were visibly nervous. Shelly snapped that we were being ridiculous. Then suddenly... Sirens.

Shelly got arrested. In my deepest, secret heart I was glad. I had to take a Breathalyzer, but I passed so I had to drive the car back to the base. Neither Bev nor I knew how to get back... We were in the middle of nowhere. I tried to ask the officer but he was dismissive and essentially just said, "Have a good night."

Bev was freaking out. I remained calm and somehow figured out how to get back. The worst was having to tell her boyfriend what happened. He did not take it well.

I ran into Shelly many years later and she claimed to not remember that night at all.