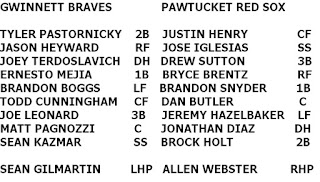 Pawtucket WINS! 5-3. I was there, Jason Heyward was there, Vee was there, Ben Crockett, Fleece Vest, Paws and Sox, and maybe 30 other people. It got pretty cold. And yet there was some weird heat between the teams. I felt a brawl fomenting.

Allen Webster started, was good not great, pitched five innings and gave up a solo home run to left fielder Brandon Boggs. He was up to 92 pitches so it was time for him to go. Pedro Beato pitched a bunch, three innings. Beato gave up three runs. I should mention that me and Beato are kind of together now, because I have attended a few games where he's pitched.

Starter for the Gwinnett Braves was a lefty, Sean Gilmartin, who says crap like "I cannot wait for the great incite Tim McCarver has to offer tonight....#notreally". Gilmartin pitched four innings and was charged with three runs. It wasn't really that interesting.

Justin Henry is terrific. He led off the first inning with a solid double down the first base line. He then stole third and made it home on a sac fly by Drew Sutton. Seriously, Drew Sutton has practically doubled in size. He is not the same guy who was on the PawSox in 2011. What the hell. 1-0 Pawtucket.

Second inning, first baseman Brandon Snyder led off with a single. Gilmartin then walked catcher Dan Butler and struck out Hazelbaker. Two men on for the very, very light-hitting Jonathan Diaz, who pulled a double out of his ass that scored Snyder. Butler later crossed the plate when Brock Holt grounded out. 3-0 Red Sox.

The Braves picked up their first run in the fourth inning, which was the Boggs HR. Roman Colon came in to pitch the fifth inning for Gwinnett. After Justin Henry singled, Jose Iglesias sac bunted him over so Bryce Brentz could bat him in. So easy. Like suffocating yourself with a dry-cleaning bag. 4-1.

The Braves scored a pair of runs in the seventh inning, with help from the rehabbing Jason Heyward. Heyward's a big star, yet the crowd at McCoy Stadium did not seem to recognize this, the ungrateful whores. Braves reliever Juan Cedeno took over for the bottom of the seventh and allowed some walks and singles that led to Pawtucket's fifth run.

Is Anthony Carter the closer? Maybe. Carter pitched the ninth inning and got the save with a little help from a 6-4-3. FIN.

pastor nicky, will today's sermon be available as a podcast?
1. Vanessa won the Tweet Your Seat thing! Congratulations! So glad we got together to plan a baby shower and talk about opening day/spring training/Kevin Millar/lager v. IPA/Jeff Levering/Washington DC/books and cookies.

3. Captain Obvious Jose Iglesias comes out to bat, "Hustlin" by Rick Ross plays. Every Day I'm Hustling. Okay, thanks Jose, we get it. You're trying really hard now.

4. Mark Hamilton did not play, had a thing on his wrist.

I feel kind of famous now.